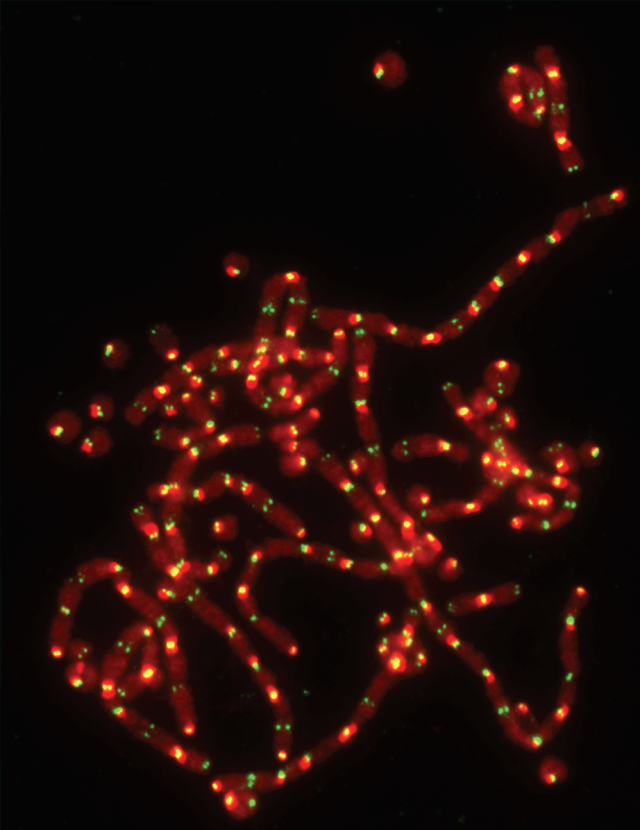 For most cells, a protein called telomere-associated factor TRF2 is essential for protecting the ends of chromosomes. Without it, chromosomes usually fuse together, and cells lose their ability to divide. These images show the consequences of TRF2 deletion in differentiated cells, with DNA labeled in red and telomeres in green. CCR scientists have discovered that for embryonic stem cells, however, TRF2 may not be essential. This understanding may help to find better ways to keep cancer cells in check. Credit: Marta Markiewicz-Potoczny, CCR, NCI, NIH

Chromosome ends need special care. To a cell, the free strands of DNA at the end of chromosomes may look like pieces of broken DNA that need to be repaired. This would be detrimental because it would lead to the fusion of chromosomes. A DNA-protein complex, called a telomere, caps each chromosome end, protecting and hiding it from the DNA damage-response pathway. Telomeres gradually shorten as we age until eventually, cells lose their ability to divide because their telomeres become too short. To continue their growth, cancer cells must circumvent this limit, and understanding how telomeres work is important for finding better ways to keep cancer cells in check.

Almost all of our cells use the same strategy to guard their telomeres against inappropriate DNA repair, but researchers led by Senior Investigator Eros Lazzerini Denchi, Ph.D., have discovered that embryonic stem cells — cells that arise early in development and have the potential to become virtually any of the body’s specialized cells — have a unique way of dealing with this problem. Findings that the team reported in Nature suggest that embryonic stem cells may be able to elongate vulnerable telomeres to avoid triggering a problematic DNA damage response.

In their studies of mouse embryonic stem cells, Lazzerini Denchi and colleagues found that these cells can grow without a protein called TRF2. This was surprising because, for most other cell types, TRF2 is an essential telomere protection protein. Without it, chromosomes usually fuse together, and cells lose their ability to divide.

Postdoctoral fellow Marta Markiewicz-Potoczny, Ph.D., found that when she eliminated TRF2, embryonic stem cells activated a set of genes that are usually only turned on in a newly fertilized egg. One of these, ZSCAN4, appears to be a key part of these cells’ unusual strategy for protecting their chromosome ends. Notably, this gene is sometimes active in cancer cells — so the discovery may tell us something about how cancer cells grow.

Lazzerini Denchi notes that most cancer cells evade telomere-imposed growth limits by reactivating an enzyme called telomerase, which rebuilds chromosomes’ shortening ends. But about 10 percent of cancers manage to extend their telomeres without telomerase — and many of these cancers are particularly aggressive. If ZSCAN4 turns out to be important for enabling such cells to escape growth restrictions without telomerase, it might point researchers toward new targets for drug development.

Embryonic stem cells have their own strategy for protecting chromosome ends