A New Application for an Old Medicine 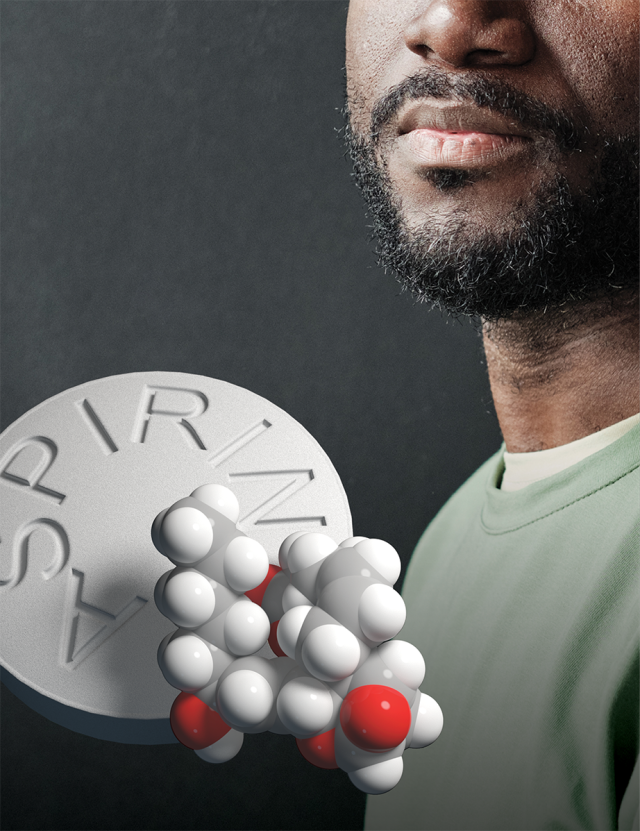 Regular use of aspirin (shown here in pill and molecule form) may benefit Black men by reducing their risk both of developing aggressive prostate cancer and of dying from the disease. This image represents a participant in this study, most of whom came from the greater Baltimore area, including patients from both the Baltimore Veterans Affairs Medical Center and the University of Maryland Medical Center. A map of Baltimore is depicted on the front cover in a pattern that informs cancer researchers and the public about inequalities in health. Credit: Alan Hoofring, NIH Medical Arts; iStock

For thousands of years, a substance derived from willow tree bark has been used to treat pain. Today we know it as aspirin. Now, CCR researchers have uncovered how in African American men with prostate cancer, aspirin could also improve outcomes for the disease.

This research, led by Senior Investigator Stefan Ambs, Ph.D., M.P.H., and published in the Journal of the National Cancer Institute, increases our understanding of how regular aspirin use may benefit African American men by potentially reducing their risk of developing aggressive prostate cancer and dying from the disease. The findings are especially important given that, compared to white men, African American men are more likely to develop prostate cancer and are twice as likely to die from it.

Ambs and colleagues initially sought to explore whether the biology of the disease may contribute to these disparities. Through the long-standing NCI-Maryland prostate cancer case-control study, they had access to an ideal pool of patient information. Over many years, the study has recruited men diagnosed with prostate cancer for long-term monitoring to understand what contributes to the excessive burden of disease among African American men.

Initial data from the study showed that many prostate tumors found in African American men harbor a distinct immune-inflammation signature that coincides with greater disease severity. Additional research revealed that this signature also occurs systemically. Moreover, a subgroup of African American men with prostate cancer has exhibited elevated levels of the metabolite thromboxane A2 (TXA2), which is primarily produced by the cyclooxygenase (COX) enzyme located in blood platelets.

Ambs made a connection to aspirin because of its ability to inhibit the COX pathway. Early evidence suggested that regular aspirin use may protect against lethal prostate cancer in African American men. This prompted Ambs’ team to explore the role of TXA2, aspirin and disease severity and mortality in more detail.

Their retrospective study showed that pro-metastatic TXA2 is often higher in African American men with prostate cancer, but not in European American patients, and that high levels of the metabolite more than doubled the chances of developing metastases. Strikingly, African American men in the study who self-reported taking aspirin regularly had lower TXA2 levels and decreased risk of mortality. 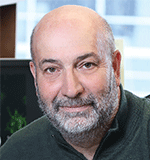 “It’s exciting and satisfying that we have discovered a mechanism that appears to have a significant effect and could potentially contribute to metastatic and lethal disease in this high-risk population for prostate cancer,” says postdoctoral fellow Maeve Bailey-Whyte, Ph.D., M.P.H., who worked on this study as part of her NCI Cancer Prevention Fellowship.

Both Ambs and Bailey-Whyte agree that the NCI-Maryland prostate cancer study, for which recruitment has concluded but long-term data collection continues, is a unique and invaluable resource for studying prostate cancer in an underrepresented population. But they note some difficulties in moving forward with a prospective study, particularly because many minority groups are underrepresented in these studies and clinical trials, including African American men. This challenge is compounded by the fact that prostate cancer typically progresses slowly, requiring long-term data collection.

“Without long-term studies, we will be unable to assess associations between cancer risk factors and survival outcomes, which may lead to prevention strategies in the future,” says Bailey-Whyte. “It reinforces the importance of including more diverse populations in future trials.”