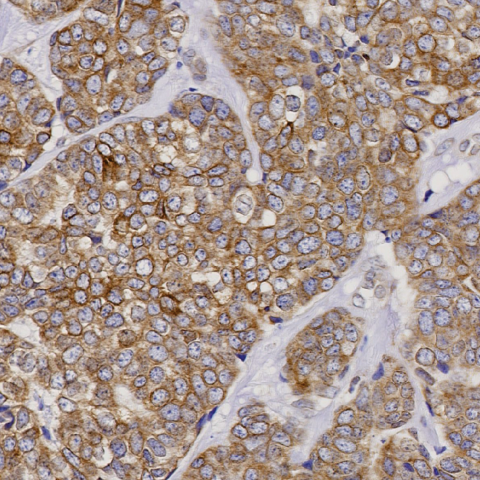 A team of researchers from CCR and Columbia University has discovered that women of African ancestry have higher amounts of a protein called gp78 in their breast cancer tumors compared to women of European descent, leading to worse outcomes. The team’s findings were published on May 31, 2022, in JCI Insight.

Breast cancer is one of the most frequently diagnosed cancers worldwide and is more likely to be lethal for women of African descent, but the exact reasons for this difference have been unclear. CCR researchers wanted to identify possible biological contributions to this disparity.

The gp78 protein is a ubiquitin ligase, a type of protein that helps label other proteins for degradation when they are not functional or no longer needed. In earlier work, CCR Senior Investigators Stefan Ambs, Ph.D., M.P.H., Laboratory of Human Carcinogenesis, and Allan Weissman, M.D., Cancer Innovation Laboratory, noticed some breast cancer tumors might have increased amounts of gp78 protein. To follow up on this observation, Weissman reached out to Kevin Gardner, M.D., Ph.D., Professor of Pathology and Cell Biology at Columbia University, who has access to breast cancer tumor samples from an ethnically diverse population of women.

When the team looked at gp78 protein levels in tumors from over 500 patients with breast cancer, they made a fascinating discovery. The gp78 protein levels were indeed higher in the tumor samples, but with more elevated levels in women of African descent. “There was a clear and significant difference,” Gardner says.

Upon further investigation, the researchers found that gp78 protein levels alone could predict a woman’s prognosis if they were of African descent. When the team compared tumors with high or low levels of gp78 protein, they saw significant differences in the activity levels of cellular pathways that deal with immune responses, cell metabolism, cell growth and adaption to stress — all important factors in cancer cell survival. The researchers’ findings suggest that gp78 could be a functional marker — meaning that an increased amount of gp78 protein is linked to the tumor’s ability to survive and spread, leading to a worse outcome for the patient.

“The finding that gp78 levels predict survival for women of African descent with breast cancer directly addresses a major health disparity and outstanding societal issue,” says Weissman. The researchers’ next step will be to understand how gp78 is affecting cellular processes in breast cancer cells and why it is more impactful in women of African ancestry.

“The hope is that we can gain insight into the role gp78 plays in these processes and then try to intercede with drug treatment,” Gardner says. “It’s about getting the right treatment to the right patient at the right time.”