A novel drug combination becomes the standard of care for kidney cancer. 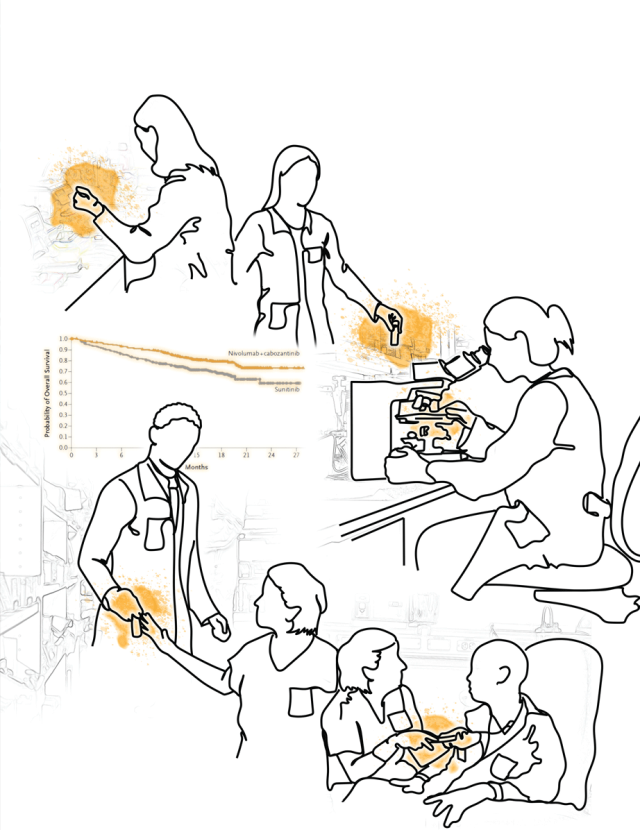 Some discoveries lead you in unexpected directions. When Senior Investigator Andrea Apolo, M.D., sought to explore a new combination of drugs for treating bladder cancer, the results yielded impressive benefits in another tumor type. Apolo had enrolled patients with bladder cancer as well as several patients with other genitourinary tumors including renal cell carcinoma (RCC), the most common form of kidney cancer, in a phase I clinical trial to evaluate drug safety. While the bladder cancer patients benefited from the drug combination, the patients with kidney cancer did even better and were twice as likely to experience an overall response. Their tumors shrank more than 30 percent from their original size.

These initial results prompted Apolo and her colleagues, oncologists Toni Choueiri, M.D., Dana-Farber Cancer Institute, and Robert Motzer, M.D., Memorial Sloan Kettering Cancer Center, to study the novel drug combination in a larger clinical trial, specifically in patients with RCC. The positive results from this phase III trial, reported in the New England Journal of Medicine, led to U.S. Food and Drug Administration (FDA) approval of cabozantinib (Cabometyx®) combined with nivolumab (Opdivo®) for RCC in 2021. The combination is now considered a first-line therapy for patients with the disease.

Cabozantinib works by inhibiting the activity of multiple protein receptors in cancer cells that are associated with tumor growth, thereby limiting the formation of new blood vessels that supply the tumor with nutrients and stopping the spread of cancer. Apolo initially studied cabozantinib with collaborators in the lab, and as she began to study the drug in patients, she realized that it was not only able to affect protein receptors in cancer cells, but it also interfered with the ability of cancer cells to manipulate the immune system for survival.

This finding provided the rationale to pair cabozantinib with nivolumab for treating patients with RCC. Nivolumab is a checkpoint inhibitor that works by boosting the immune system’s ability to kill cancer cells.

In the phase III trial, participants were given either the combination of cabozantinib and nivolumab or the drug sunitinib (Sutent®) alone, which is a standard therapy for kidney cancer that blocks a key enzyme needed for cancer growth. Although patients who received the novel drug combination experienced more adverse side effects, they had a longer progression-free survival period of 16.6 months, compared to 8.3 months for patients given sunitinib. 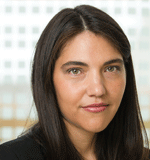 “I knew this combination would be extremely effective in RCC based on the early phase I results,” Apolo says. “There were no patients treated with this combination that did not have some kind of response or, at minimum, stable disease — nobody’s disease progressed.”

Apolo not only initiated the research of this drug combination for bladder cancer and RCC, but she guided the clinical trials that, in less than three years, led to FDA approval of the combination therapy. She notes that patients living with RCC have had few new treatment options for decades. “It feels amazing to have identified a new way to treat this cancer and to see it approved and helping patients,” she says.

Apolo attributes her team’s ability to move quickly from a phase I to a phase III trial to support from the Cancer Therapy Evaluation Program, which oversees national extramural clinical trials funded by the National Cancer Institute, including cooperative research and development agreements for this study with industry partners Exelixis, Bristol Myers Squibb and Pfizer. “The NIH is a wonderful place,” Apolo says, “because of the basic laboratory resources and clinical trial infrastructure, which helps us conduct these kinds of trials that can eventually lead to effective cancer therapies.”