Gelling Together Against Cancer

Surgeons and chemists team up to create a new hydrogel for treating mesothelioma. 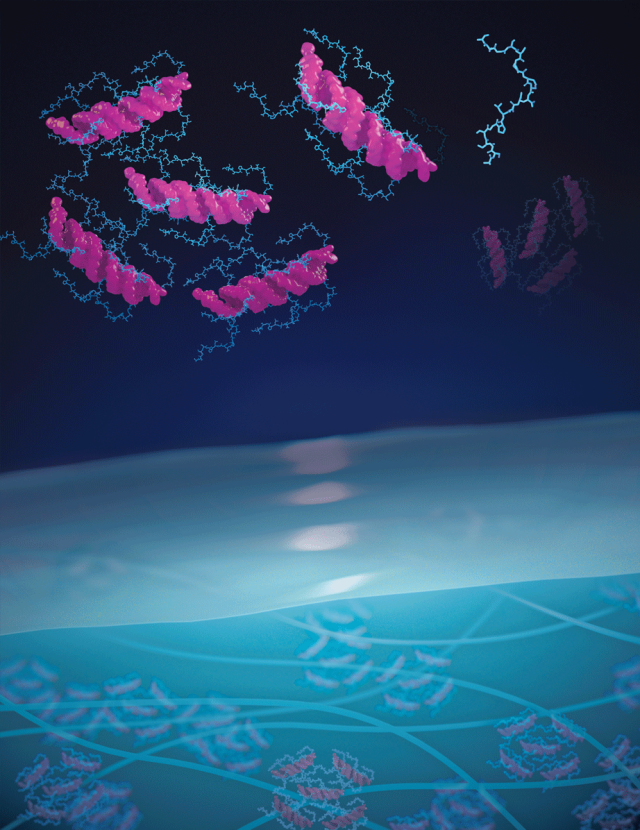 CCR scientists developed a novel treatment that delivers therapeutic small RNAs (microRNAs) locally to tumors. This image illustrates the two-stage process. First, the microRNAs (seen in pink) bind to peptides (seen in blue). The paired particles are then encased in a hydrogel matrix (seen at the bottom of the image) which can be applied to tissue surfaces via a spray or syringe. The peptides help deliver the microRNAs directly into residual cancer cells to kill them. Credit: Anand Singh, CCR, NCI, NIH

Every time a surgeon removes a tumor, there is a risk that some cancer cells remain. While this risk is relatively small with certain cancers, it is very high for mesothelioma, a cancer that affects the thin membranes encasing vital organs. It is virtually impossible to remove all traces of mesothelioma via surgery. To combat this problem, an interdisciplinary team of CCR surgeon-scientists and chemists created a novel solution: a hydrogel containing microRNAs that can be applied to the surface of organs during surgery to target and kill residual mesothelioma cancer cells.

MicroRNAs are molecules that control gene expression mainly by binding with messenger RNA. Investigator Chuong Hoang, M.D., F.A.C.S., had previously identified microRNAs that can disrupt the signaling of mesothelioma cells and kill them, but he needed an effective way to deliver the microRNAs to the cells.

It was not a problem that would automatically occur to chemists, but once Hoang and postdoctoral fellow Anand Singh, Ph.D., presented this clinical challenge to Senior Investigator Joel Schneider, Ph.D., and former postdoctoral fellow Poulami Majumder, Ph.D., the chemists began to apply some of the rules of basic science around it.

By partnering together, the team was able to develop a hydrogel that contains miniature proteins called peptides, which can bind to microRNAs and deliver them directly into cancer cells. Hoang and Schneider attribute the highly collaborative environment at CCR as a key reason for this innovative partnership and research.

During surgery, the hydrogel can be injected or sprayed onto the affected site, such as the surface of a patient’s lungs. Its highly viscous nature allows it to seep into the nooks and crannies of organs, ensuring that the microRNAs can target any residual cancer cells left behind after surgery. 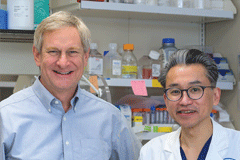 The researchers tested the hydrogel in four different mouse models. They found that in even the most aggressive models of mesothelioma, mice that received the hydrogel treatment lived significantly longer than the mice that did not.

The results, which were reported in Nature Nanotechnology, “were quite striking,” Hoang says. “Our hope is that we will be able to do something similar in humans, as most other drugs and small molecule strategies to date have not significantly improved survival in people with mesothelioma.”

Notably, this method could also be applied to other difficult-to-treat surface tumors, such as ovarian cancer or glioma, if the right microRNAs for targeting and killing these cancers could be identified.

The researchers are considering the possibility that the hydrogel could be used as a first-line therapy, sidestepping the need for surgical resection, and they plan to explore this possibility in future studies. In such a case, the hydrogel would be sprayed directly on organs, but no tissue would need to be surgically removed. “That would be a paradigm shift,” Hoang says. “It would be a big game changer for all surface cancers.”