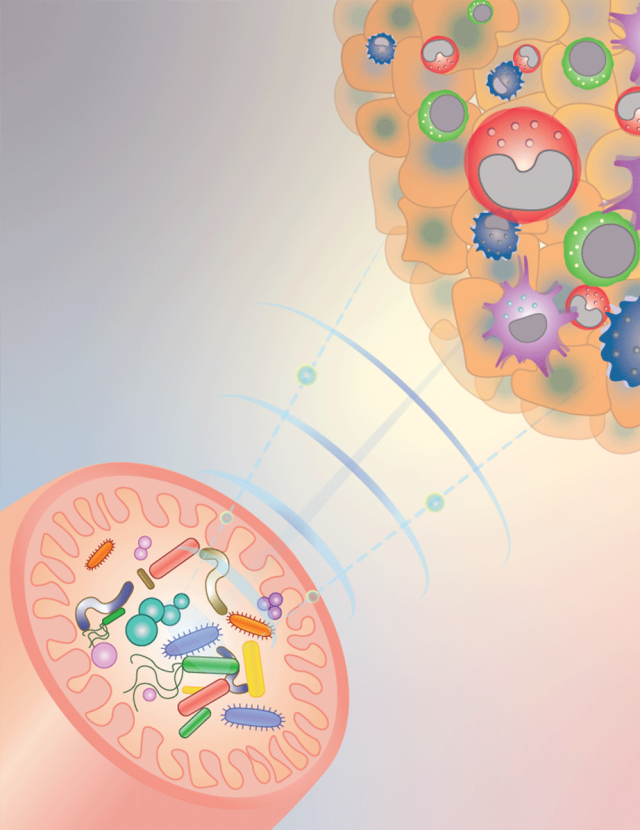 A tumor’s fate depends not just on the tumor alone. An entire community of cells influences how cancer grows, spreads and responds to treatment. Amazingly, that includes microbes that live in our guts. It has become clear that some gut bacteria can help the immune system keep tumor growth in check — and CCR scientists have now figured out one way bacteria do it.

Stadtman Investigator Romina Goldszmid, Ph.D., and her team are studying how gut microbes affect tumors by looking at an important aspect of anti-tumor immunity: the white blood cells of the innate immune system. The innate immune system provides a first-line defense against cancer and invading pathogens. Its cells are usually well represented at tumor sites, where they both attack the threat directly and summon other immune cells to the fight.

Goldszmid’s team has shown in animal studies that having a community of microbes in the gut is important for the innate immune system’s ability to defend the body against tumors. In mice raised in a sterile environment, whose guts remain microbe-free, innate immune cells are still present at tumor sites. But when Goldszmid’s team analyzed those immune cells, they found that the mix of cell types was different from the mix found at the tumor sites of mice with gut microbes. The tumors of microbe-free mice even contained innate immune cells that had been programmed to support tumor cells’ growth, rather than destroy them.

In work reported in Cell, graduate student Khiem Lam and postdoctoral fellow Romina Araya, Ph.D., traced these differences to the absence of molecular signals produced by bacteria that activate an immune-stimulating pathway called STING. They found that when a normal mix of bacteria is present in the gut, some of those bacteria produce molecules that enter immune cells called monocytes; the molecules activate the STING protein to induce production of the immune mediator type I interferon (IFN). Type I IFN then triggers changes that help the innate immune system rally an anti-tumor defense. 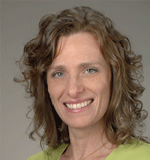 Goldszmid and her colleagues have reason to believe gut microbes may use the same signals to modulate anti-tumor immunity in patients. Other researchers have noted that the microbial communities in the guts of patients successfully treated with cancer immunotherapy are comprised differently from those of patients who do not respond to this treatment. And when Goldszmid’s team transferred the gut microbes of patients responsive to therapy to microbe-free mice, they saw a similar shift toward anti-tumor immunity, activated again by the STING pathway. Through analysis of published datasets, the researchers found an enhancement of the same innate immune signatures and type I IFN in the tumors of patients that responded to treatment.

In their animal experiments, Goldszmid’s team identified several ways to boost gut microbes’ anti-tumorigenic immune signals, including a simple shift to a high-fiber diet. Goldszmid hopes that figuring out how microbes manipulate the innate immune system will lead to new ways to use the microbes in a patient’s gut to their benefit.

The Human Microbiome in Cancer