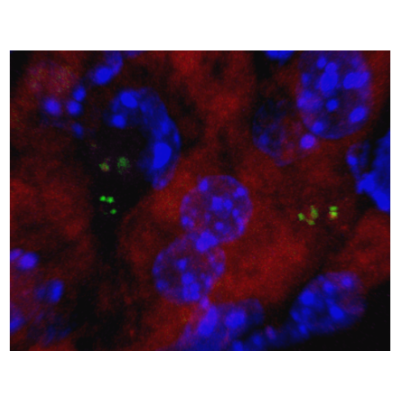 Bacteria (green) present in the liver of a mouse that has a leaky gut barrier.
Image Credit: Soumen Roy, Ph.D.

Researchers have uncovered a mechanism by which gut microbes can influence the immune response against nearby liver tumors in mice. The results were published December 15, 2020, in Cancer Discovery and shed light on how certain diseases that weaken the protective lining of the gut barrier may exacerbate a type of liver cancer called cholangiocarcinoma.

Over the years, evidence has increasingly shown how microbes in the gut can influence the immune system, including its ability to suppress tumor growth. Tim Greten, M.D., Deputy Chief of CCR’s Thoracic and GI Malignancies Branch, has been exploring the influence of gut microbes on liver tumors specifically.

The liver sits on top of the stomach and the two are connected by a portal vein, meaning that the liver could be particularly susceptible to any influence from gut microbes. What’s more, several diseases that affect the health of the gut – such as primary sclerosing cholangitis (PSC) or colitis – are associated with an increased risk for cholangiocarcinoma.

To explore these connections in greater detail, Greten’s research team studied three different kinds of mice that are models for PSC and colitis. “What we show in all of these models is that there’s a weakened barrier, so gut bacteria can potentially transmigrate into the portal vein,” Greten explains.

In these mice, Greten’s team conducted a series of experiments showing that a leaky gut barrier can result in more immune-suppressing cells in the liver, called myeloid cells. Because myeloid cells are often found near tumors and are known to suppress the immune system, they are thought to facilitate tumor growth. Indeed, the results in mice show that having these diseases of the gut, which cause a leaky gut barrier and drive an increase in myeloid cells in the liver, can be associated with more tumor growth.

“The third part of our study is about how it relates to patients. That is always the golden question, and it’s very difficult to answer this – but we have some ideas,” says Greten.

His team looked at patients who have PSC or colitis and found a similar immune signaling signature that was observed in mice with the conditions. Just like the mice that have a combination of gut disease and liver cancer, these patients had greater tumor growth and worse outcomes.

Greten notes that these findings are still very preliminary, but he hopes they could one day lead to therapeutic applications.

“A lot of researchers are trying to target myeloid cells right now because we know the cells suppress the immune system. The new insights from our study would be that you could potentially change myeloid cells by altering the gut microbiome,” he explains. “But more research is needed to do this.”