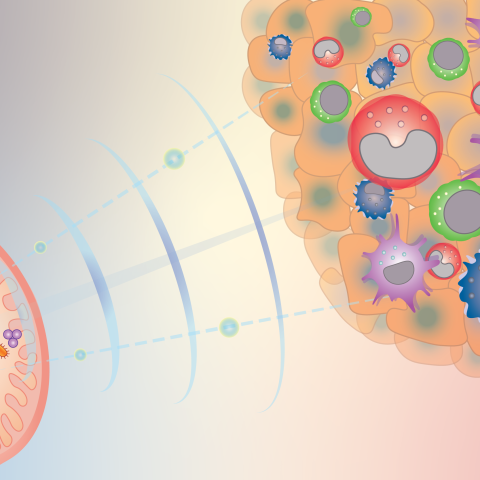 Certain gut microbes can help the immune system fight tumors — and CCR scientists have figured out one way they do it. In experiments reported Oct. 7, 2021, in Cell, Romina Goldszmid, Ph.D., Stadtman Investigator and head of the Inflammatory Cell Dynamics Section in the Laboratory of Integrative Cancer Immunology, and colleagues showed how bacteria can reprogram innate immune cells in mice, helping control tumors and improving the response to cancer immunotherapy. Using clinical data and patient samples, the team has found evidence suggesting similar microbe-induced changes may support patients’ response to cancer immunotherapy.

There is increasing evidence that gut microbes are important regulators of the body’s immune response against tumors, and Goldszmid’s team hopes that a detailed understanding of this relationship will reveal ways to bolster anti-cancer immunity. Her team is particularly interested in microbes’ impact on the innate immune system, which is first to respond to cancer cells and other threats. They’ve found that in mice whose intestines are home to a complex community of microbes — as is usually the case — immune-stimulating dendritic cells and monocytes are well represented at tumor sites. But in microbe-free mice, tumor-promoting macrophages (a cell type that, under different circumstances, is capable of killing cancer cells) are more prominent.

Graduate student Khiem Lam, B.S., and postdoctoral fellow Romina Araya, Ph.D., traced these differences to microbe-induced signaling that begins when a molecule produced by bacteria, such as one called c-di-AMP, enters monocytes and activates a protein called STING. This triggers monocytes to produce type I interferons, immune signals that summon and activate various innate immune cells that are important for anti-tumor immunity.

Simply giving mice ci-di-AMP was enough to trigger these changes. The researchers found they could also mimic these effects by perturbing animals’ microbiomes. One way they achieved this was through diet: A high-fiber diet stimulated type I interferon production and promoted anti-cancer immunity, slowing tumor growth and improving animals’ response to immune checkpoint inhibitors, a type of cancer immunotherapy.

The researchers also examined data from recent clinical trials in which patients for whom immune checkpoint inhibitors had been ineffective received fecal matter transplants from an immunotherapy-responsive donor, then repeated immunotherapy. While not all trial participants benefited from this treatment, Goldszmid’s team detected the same anti-cancer immune changes they had noted in their animal studies within the tumors of those that did, supporting the idea that gut microbes were responsible.

It’s not clear yet whether dietary changes will improve cancer immunotherapy responses in patients as well as they did in mice. But the more researchers know about how microbes’ impact anti-tumor immunity, the better equipped they will be to adjust this relationship to benefit patients. “Manipulating microbiota may be an effective approach,” Goldszmid says. “What I think is key is focusing on mechanism, and trying to target functional aspects of the microbiota rather than specific bacteria.”