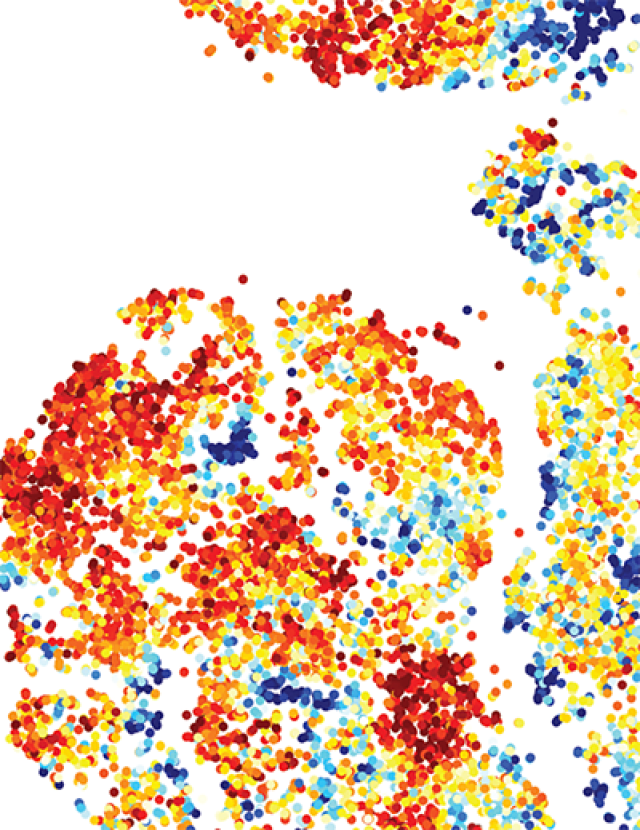 This image exemplifies the diversity of the immune cells found within tumors among four mouse models that replicate key features of human melanoma. The level of expression of an immune checkpoint marker (PD-1) on each cell, represented as dots in the image, was measured by a technique known as high parametric flow cytometry and is shown in a colored scale where darker red indicates higher expression of PD-1 and darker blue indicates the lower expression.
Credit: Allen Kane, Scientific Publications, Graphics and Media, Frederick National Laboratory, NCI, NIH; Romina E. Araya

A form of immunotherapy that releases the natural brakes on the immune system has become the first-line treatment for metastatic melanoma. The treatment uses a group of drugs called immune checkpoint inhibitors to boost the body’s ability to destroy tumors and to stop the spread of some aggressive cancers. They do not work for most melanoma patients, however, and clinicians need better tools to predict how individuals with this deadly cancer will respond to these treatments.

Led by CCR’s Glenn Merlino, Ph.D., a team of scientists has spent more than a decade developing and characterizing mouse models that replicate key features of human melanoma. Because no single model can capture the biological and clinical diversity of melanomas seen among patients, Merlino’s team assembled a set of four mouse models and used them in combination to study immunotherapy responses, as they reported in Nature Medicine.

While the four models are genetically very similar, differences in cancer-promoting gene mutations and immune system composition make each model distinct. Their responses to immunotherapy reflect the variations seen in outcomes among patients with metastatic melanoma, where only about a third respond to checkpoint inhibitors like pembrolizumab (Keytruda), nivolumab (Opdivo) and ipilimumab (Yervoy). Immune checkpoint inhibitors slowed or blocked tumor growth in two of the models but were ineffective in the other two. 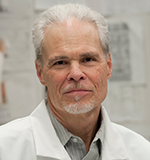 By comparing mice that responded to these treatments to those that did not, postdoctoral fellow Eva Pérez-Guijarro, Ph.D., found that many of the genes most strongly associated with immunotherapy outcomes were involved in the development of melanocytes, the pigment-producing cells from which melanoma begins. The more closely the activity of 45 key genes resembled that of melanocytes’ precursor cells, rather than that of fully developed melanocytes, the less likely a tumor was to respond to immune checkpoint inhibitors.

The team examined the activity of this same set of genes in clinical data and found that this relationship held true among patients. Those whose melanoma responded best to immunotherapy had gene activity in their tumors that paralleled that of mature melanocytes, as seen in the mice. This suggests that monitoring the activity of these developmental genes, particularly when combined with other biomarkers of immunotherapy response, might help clinicians predict which patients will respond to immune checkpoint inhibitors.

Beyond their potential to identify the best candidates for existing immunotherapies, the findings also offer hope that it may be possible to develop more effective treatments that make melanoma cells more sensitive to immune checkpoint inhibitors by pushing them toward a more mature developmental state.