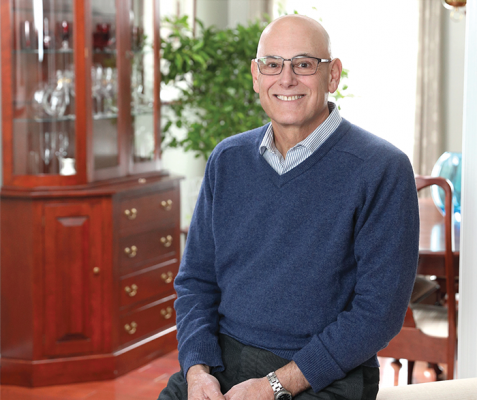 Jeff Larioni participated in an NCI clinical trial of moxetumomab pasudotox (Moxe) for hairy cell leukemia conducted at the NIH Clinical Center and directed by Robert J. Kreitman, M.D. Originally diagnosed in 2012, Jeff began treatment on the Moxe trial in February 2016. He achieved complete remission, but residual disease was discovered about a year later. Kreitman and Jeff’s primary care physician are currently monitoring his blood levels. Jeff says: “For now, I am feeling healthy and have an active lifestyle. I have complete faith in Dr. Kreitman.” Credit: Chia-Chi Charlie Chang, NIH

The U.S. Food and Drug Administration’s (FDA) approval of moxetumomab pasudotox (Lumoxiti) in September 2018 for certain adults with hairy cell leukemia (HCL) provides a promising new therapy to a group of patients who previously had few other options. It also marks the latest milestone in a decades-long journey that unfolded largely in CCR.

In HCL, a slow-growing cancer comprising 2 percent of leukemias, the bone marrow churns out abnormally high numbers of white blood cells called B lymphocytes. Although many patients enter remission with current treatments, most will eventually relapse. Moxetumomab pasudotox, or Moxe for short, can help patients whose HCL did not respond well to standard therapy and had several relapses.

Moxe is an immunotoxin, a drug that uses an antibody that recognizes a protein found on cancer cells, to deliver a toxin that gets engulfed by, and then kills, the target cancer cells. In Moxe, the antibody binds to CD22, a protein found on B lymphocytes and cancers derived from B lymphocytes, and brings a toxin into the cell made by the Pseudomonas aeruginosa bacterium. 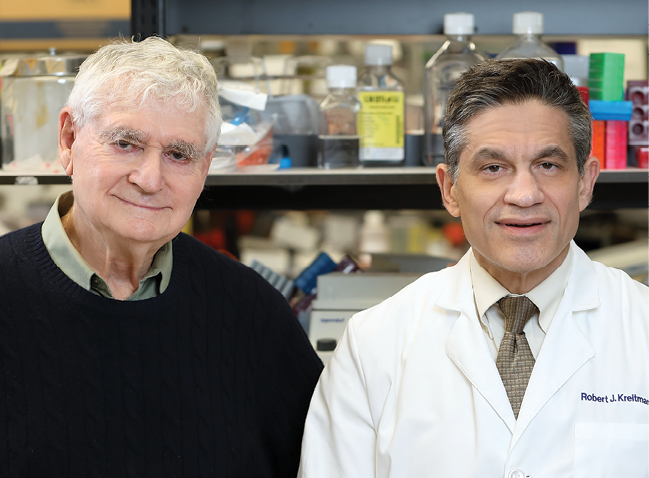 Moxe’s history stretches back to the 1980s. Ira Pastan, M.D., Co-Chief of CCR's Laboratory of Molecular Biology, and his team showed that the Pseudomonas toxin, when attached to various human antibodies, could kill human cancer cells, but it killed other human cells, too. At the time, many in the scientific community were concerned that immunotoxins would prove too toxic for patients.

It was at this point that the CCR’s unique research environment came into play, providing long-term support of Pastan and colleagues’ high-impact, high-risk research. In meticulous work over the years, Pastan’s team developed immunotoxins that efficiently killed cancer cells by shortening the toxin. By testing a range of cellular targets, they identified CD22 as the most potent target. They also re-engineered the immunotoxin’s antibody portion to bind more tightly to CD22.

Moxe was licensed to MedImmune, a subsidiary of AstraZeneca, for commercial development, and Medimmune continued to work with CCR to further develop the drug. Clinical trials at the NIH Clinical Center were directed by Robert J. Kreitman, M.D., Senior Investigator in Pastan’s lab.

A phase I trial enrolled 49 patients with relapsed or refractory HCL. Fifty-seven percent of the patients had a complete response. These promising results, reported in Blood, convinced the FDA to allow CCR investigators to fast track Moxe to a phase III trial. After 17 months of follow-up, 75 percent of the patients had a complete or partial response. Most complete responders had no minimal residual disease, meaning no rogue cancer cells that can lurk in bone marrow and escape standard therapy, leading to relapse.

Based on these findings, published in Leukemia, the FDA approved Moxe for HCL that has recurred or progressed after at least two prior systemic therapies. Pastan notes this research probably could not have happened anywhere else.