Infection-fighting white blood cells could be a key element in developing an effective vaccine treatment against HIV/AIDS.

Treatment options for infection with the human immunodeficiency virus (HIV) have greatly improved over the last 30 years, and current prevention tools, such as pre-exposure prophylaxis (PrEP), can work well, but the ultimate goal in HIV management remains the development of a preventive vaccine. CCR scientists have discovered that a certain type of white blood cell, known as a CD14+ monocyte, may be crucial in that quest.

AIDS arises when HIV infects white blood cells, called T cells, and thus impairs the adaptive response. The fact that the virus infects the very cells a conventional vaccine would seek to activate has complicated efforts to develop a vaccine. The virus’ effects on the innate response have been difficult to study and remain unclear, making development of an HIV vaccine all the more challenging.

Research led by Genoveffa Franchini, M.D., Senior Investigator in CCR’s Vaccine Branch, and published in Nature Medicine, tackles this conundrum. Franchini and her team tested various vaccine regimens to determine whether they could lower infection of simian immunodeficiency virus (SIV), the primate version of HIV, in macaque monkeys. 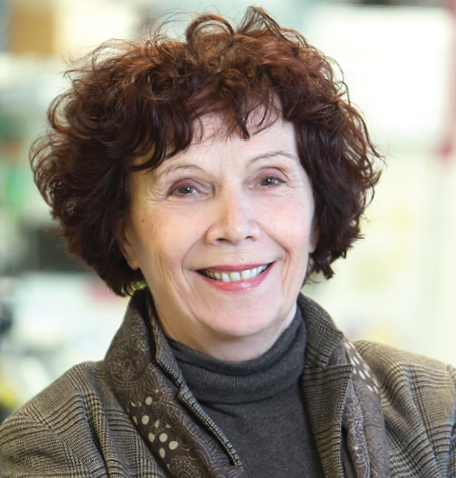 After treating the macaques, the researchers analyzed samples of their blood. The team measured the number of immune system cells released after viral infection and the amount of antibody produced by the cells that recognize SIV. The vaccine regimen that produced the strongest immune response did not prevent infection. Instead, other approaches offered protection by balancing the activity of innate immune-response cells.

Macaques primed with DNA and boosted with another vaccine called ALVAC-SIV had more monocytes that expressed the CD14 protein and fewer that expressed the CD16 protein than macaques who were not protected against SIV infection. As it turns out, these CD14+ monocytes may be vital to mobilizing an innate response against SIV. Franchini thinks they do so by releasing a protein called IL-1beta, whose main function is to help immune cells involved in the innate response form a long-term memory of a foreign invader, so they can recognize it and activate the innate response if they encounter the invader again.

When immune cells that have formed a long-term memory of SIV encounter it again, they respond to it by secreting a protein called IL-10, Franchini hypothesizes. IL-10 lowers the levels of the CCR5 receptor on T cells to which SIV normally binds in order to infect them. Sure enough, vaccine regimens that protected against SIV infection resulted in T cells that express less CCR5 on their surface. Together, the findings suggest that an effective vaccine against HIV/AIDS would act via tipping the monocyte balance toward CD14+ monocytes and thus trigger an effective response of the immune system to the virus.