Diving Deep into the Red 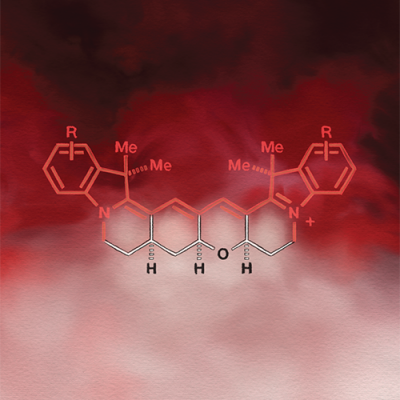 Fluorescent molecules are used frequently to dye and illuminate cells to be studied. Fusing a ring system (shown in white) onto an existing chromophore (the part of the compound responsible for absorbing light, shown in red) makes the new molecule much brighter. These new dyes, which are assembled using recently discovered organic chemistry techniques, will allow researchers to peer more deeply into living systems with unprecedented resolution. Credit: Joseph Meyer, Scientific Publications, Graphics and Media, Frederick National Laboratory, NCI, NIH

Fluorescent probes are workhorse molecules used by biologists to illuminate the inner workings of cancer cells. By lighting up cell components of interest, researchers can then observe cells in action through high-powered microscopes. CCR investigators have synthesized a novel class of far-red fluorescent probes that could allow live tissue to be imaged in greater depth and detail than is possible with current techniques.

Martin Schnermann, Ph.D., Senior Investigator in CCR’s Chemical Biology Laboratory, and his team succeeded in developing a method to generate bright, far-red and near-infrared fluorescent probes, which they described in the Journal of the American Chemical Society. The making of such probes has eluded chemists for decades and only moderately bright dyes could be synthesized prior to this breakthrough.

Using cutting-edge synthetic chemistry techniques, Schnermann and his team solved this longstanding puzzle. They built a system of chemical ring structures and attached them to a certain class of fluorescent probes in order to block the rotation responsible for restricting the probes’ brightness. The ring structures made them much brighter.

The Schnermann lab, with help from collaborators, including Jadranka Loncarek, Ph.D., of CCR’s Laboratory of Protein Dynamics and Signaling, showed that their probes have an improved ability to go from a dark to bright state, making their signal clean and easy to distinguish from background fluorescence. Schnermann notes that this feature makes the probes ideal for single-molecule localization microscopy (SMLM). In SMLM, molecules in a tissue sample—such as tumor cell-surface markers—are fluorescently labeled and turned on to a bright state one at a time within a sample, allowing researchers to count them and determine their location with more precision than fluorescence-activated cell sorting or other existing methods. 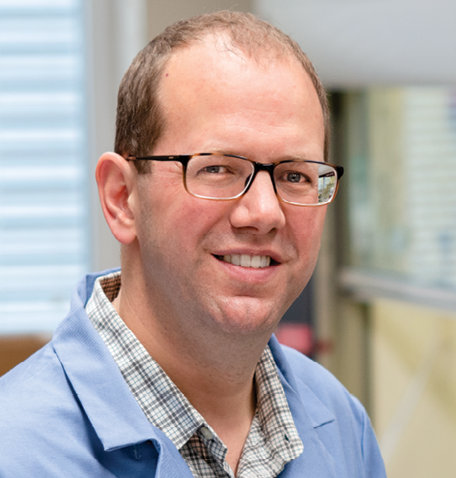 Schnermann and his team’s bright, far-red and near-infrared fluorescent probes are less toxic than currently available counterparts, suggesting they could be used for imaging live tissue. They also emit long, deeply penetrating wavelengths, which could allow them to be used for imaging deep into thick tissues, such as tumors. These promising properties point to several applications, such as tracking tumor cells in live tissues, which could lead to a better understanding of how cancer behaves in a living system. They also suggest a number of clinical applications, such as diagnostic imaging. For example, surgeons could use these probes to guide the removal of tumors from cancer patients, Schnermann says.