Precisely locating and killing tumors in the body without harming surrounding cells is a major challenge in cancer treatment. CCR researchers have helped design breakthrough imaging technologies to better understand where and how tumors grow. 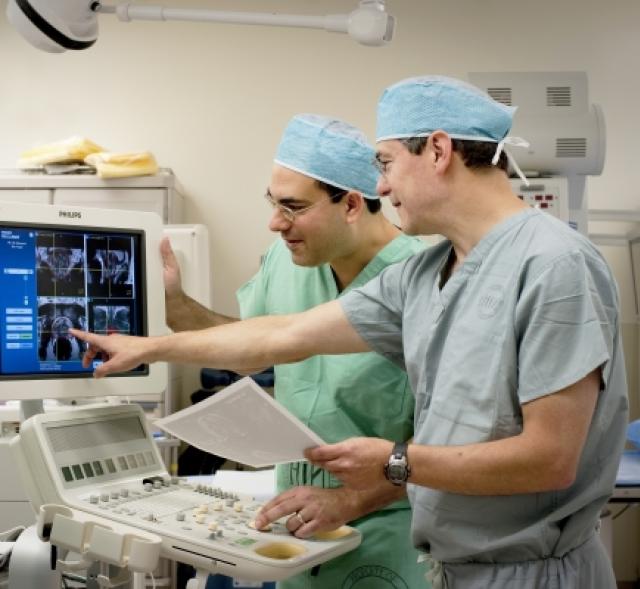 A major challenge in cancer treatment is to precisely locate and monitor tumors in the body so that the tumors can be killed without harm to surrounding cells. In the past decade, multidisciplinary teams of CCR researchers have helped design breakthrough imaging technologies that enable a closer understanding of where and how tumors grow in the human body. One of these imaging technologies, now known as UroNav, is revolutionizing clinicians’ ability to accurately diagnose and treat prostate cancer.

A prototype of the new method was patented by CCR researchers in 2007. After extensive testing at NIH, the investigators combined forces with InVivo, a subsidiary of Philips Healthcare, to build a commercial version of the prototype. Now known by the name UroNav, the device enables three-dimensional, real-time visualization of prostate tumors during biopsy. Released to the market in 2013, UroNav, and other devices based on the same technology, may soon replace the current standard of care for prostate cancer detection and diagnosis.

A year after its release, UroNav was included in U.S. News & World Report’s list of the top ten most notable medical advances in the past 25 years. Clinical testing is underway to determine whether such devices may also be used to guide localized laser ablation of scattered, small prostate tumors as an alternative to full prostate removal or irradiation.

Another imaging tool developed by CCR researchers helps in the identification of treatment-resistant tumors. The method, called electron paramagnetic resonance imaging (EPRI), is similar to an MRI in that it uses a magnetic field to reveal properties of atoms. In the case of EPRI, however, the primary focus is on free radicals, which are uncharged molecules with a free electron. EPRI indirectly detects the low oxygen levels characteristic of growing tumors that occur in a wide range of cancers. Tumors with inadequate oxygen supply, called hypoxic tumors, are more resistant to radiation and chemotherapy and have an increased risk of metastasis than tumors with normal oxygen levels.

In 1998, CCR researchers used EPRI to create the first map of oxygen content in tissues and tumors of mice. In 2008, the team demonstrated that EPRI, when used in conjunction with MRI, provided detailed, three-dimensional information about the exact location of treatment-resistant tumors in living organisms in real time, thus creating a roadmap to help target treatments to these tumors. Today, CCR continues to explore EPRI as a noninvasive way to detect tumor hypoxia in patients.