Taking advantage of their ability to explore provocative ideas, NCI investigators pioneered the study of chromatin to demonstrate its functional importance and lay the groundwork for understanding its role in cancer and other diseases. 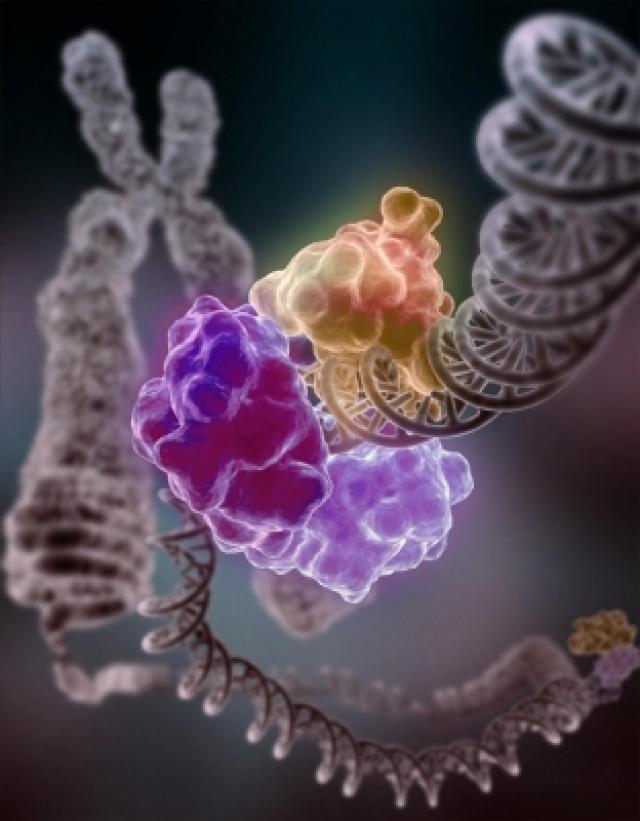 For much of the 20th century, scientists were fascinated by DNA. They probed its roles in gene activity and genetic inheritance using genetics, biochemistry and molecular biology. Most of these studies were conducted with DNA in its iconic double-helix formation. Meanwhile, it was well known that DNA in intact cells exists in a much more complex form known as chromatin, with many proteins required for its packaging. However, chromatin was mostly thought of as a means to package an organism’s genetic material and was not assumed to have any other functional significance. Taking full advantage of their abilty to explore provocative ideas, NCI investigators pioneered the study of chromatin and demonstrated its functional importance.

In all but the simplest organisms, DNA is wrapped around packing proteins known as histones. A portion of DNA winds around eight histones to form a recurring structure called a nucleosome. In the mid-1980s, NCI researcher Gordon Hager, Ph.D., uncovered the first evidence that nucleosomes are carefully and predictably positioned along regulatory regions of DNA.

Analyzing DNA near a hormone-activated gene, Hager showed that nucleosomes there corresponded precisely to sites bound by that hormone, suggesting they had a role in gene regulation. In fact, he found organized nucleosomes were essential for correct hormone-triggered gene activation. The findings led to the now well-accepted idea that the gene-activating hormone receptor might trigger functionally important chromatin changes. How that reconfiguration happened remained a mystery.

NCI biochemist Carl Wu, Ph.D., solved this puzzle. His laboratory demonstrated that chromatin adopts its more open configuration when a gene-activating transcription factor binds to its DNA. Later, Wu’s lab discovered a protein complex called NURF that drives that change, shoving nucleosomes aside to make way for the enzyme that reads the DNA.

Since Hager and Wu’s early discoveries, scientists at NCI and elsewhere have continued to find unexpected complexity in chromatin’s structure, function and biological impact. They’ve learned that chromatin is an active environment where enzymes and regulatory molecules grab on and then flit away; they have discovered that RNA molecules are critical regulators of chromatin; and they have defined how chromatin is reshaped to allow repair proteins access to the genome.

NCI scientists’ discoveries about chromatin’s function in healthy cells have laid the groundwork for understanding chromatin’s role in cancer and other diseases. Today, researchers are finding that mutations that disrupt chromatin are common in human tumors, and researchers are working to unravel the consequences of these changes.