CCR investigators were among the first to classify tumors based on genetics, laying the groundwork for today’s common practice to molecularly characterize tumors based on their genetic fingerprints for personalized treatments. 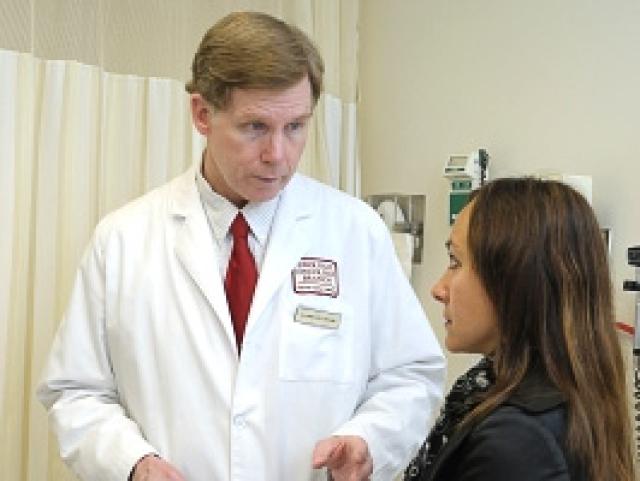 Marston Linehan, M.D., discusses treatment with a patient. Linehan is a pioneer in the study of the genetic basis of kidney cancer.
Credit: Rhoda Baer

While it is current practice today to molecularly characterize tumors based on their genetic fingerprints, CCR investigators were among the first to classify tumors based on genetics. As a result, treatments are now being tailored to an individual’s specific cancer subtype, and new therapies are being developed to target the vulnerabilities of different types of cancer cells. Major CCR successes in this area have improved the classification of kidney cancers and lymphomas and have laid the foundation for what is now called precision medicine.

Historically, kidney cancer was considered a single disease with a poor prognosis in its advanced stages. Hoping to find clues about the disease’s origins that might lead to targeted therapies, CCR investigators Marston Linehan, M.D., and Berton Zbar, M.D., set out in the 1980s to search for its genetic causes.

They established a hereditary cancer program to recruit patients with rare genitourinary cancers to the NIH Clinical Center and launched large-scale genetic studies. After analyzing the DNA of thousands of patients, the team linked mutations in the VHL gene to the von Hippel-Lindau syndrome that predisposes people to developing tumors in many organs, including the kidneys. The VHL gene is also commonly mutated in non-inherited cases of clear cell renal cell carcinoma, the most common type of kidney cancer. Understanding the VHL pathway has provided the foundation to develop a number of novel approaches to therapy for this disease.

Linehan and his colleagues went on to identify and characterize a number of different genes that are mutated in different forms of kidney cancer. Determining which mutations are present helps doctors predict how aggressive a patient’s cancer is likely to be and assists in recommending an appropriate treatment. Identifying the pathways disrupted by these mutations has also pointed toward strategies for developing new therapies, including immunotherapy.

Technology developed by CCR investigators Lance Liotta, M.D., Ph.D., Robert Bonner, Ph.D., and Michael Emmert-Buck, M.D., Ph.D., in 1996 paved the way for the large-scale molecular analysis of a range of cancers. The method, called laser capture microdissection, enables the isolation of tumor cells from the surrounding normal tissue in a sample to help determine the genetic difference between the two. As researchers view the sample through a microscope, they trace the desired cells with a laser. This allows for the precise separation of tumor cells from the healthy or precancerous tissue that surrounds them. The technique was an important step forward for genomic classification because it damages neither the structure of the cell nor its chemistry. It also leaves surrounding cells intact, thereby enabling extraction of pure cells from the desired location.

In the 1990s, CCR investigator Louis Staudt, M.D., Ph.D., began searching for molecular distinctions that might predict the clinical course of an aggressive blood cancer called diffuse large B cell lymphoma (DLBCL). DLBCLs look the same under the microscope, and although some patients respond well to chemotherapy, no one could predict who might benefit from a more aggressive approach.

Taking advantage of CCR’s support for open-ended discovery, Staudt created a novel DNA microarray termed the lymphochip and used it to analyze the activity of thousands of genes in tumor biopsies from patients with DLBCL. Interrogating their data, the team identified two main subtypes of DLBCL, each with a characteristic molecular profile that is now recognized as a distinct cancer type by the World Health Organization. The discovery explained why patients respond differently to chemotherapy and enabled researchers to develop new strategies for eliminating the more difficult-to-treat subtype, activated B-cell (ABC) DLBCL.

Most significantly, this discovery coincided with the development of the drug ibrutinib that specifically inactivated an enzyme called BTK, which Staudt showed is a lynchpin in the ABC form of the disease. In clinical trials conducted with Wyndham Wilson, M.D., Ph.D., a close colleague of Staudt, patients with ABC DLBCL had frequent responses to ibrutinib, some quite durable, whereas ibrutinib was ineffective against most other DLBCL tumors. Staudt and Wilson are extending this precision medicine paradigm to other forms of lymphoma and are devising combination regimens that are tailored to the molecular abnormalities of each lymphoma subtype.