H2AX as a Sensor of DNA Damage

Curiosity about histones led to the discovery that the protein H2AX is altered in response to harmful DNA damage called a double-strand break. This powerful tool has led to breakthroughs in both basic and clinical cancer research. 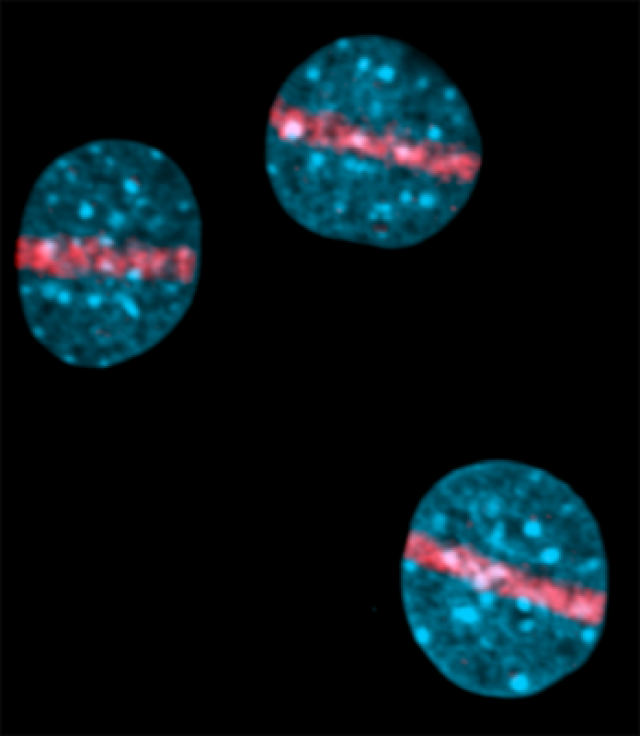 Cell nuclei were labeled with a general DNA-binding dye DAPI (shown in light blue). The red stripes show H2AX as a marker for the location of the DNA breaks in each cell nucleus.
Credit: Michael Kruhlak, Ph.D., Oscar Fernandez-Capetillo, Ph.D., and Andre Nussenzweig, Ph.D.

The ability of cells to sense and respond to DNA damage is crucial to their survival. Since damaged DNA is a known cause of cancer, determining how cells repair such damage is critical to understanding how the disease develops and finding new ways to prevent and treat it. In the late 1990s, our knowledge of these processes began to grow dramatically when CCR investigator William Bonner, Ph.D., discovered a universal hallmark of DNA damage, which revolutionized the study of genome instability.

As a young investigator, Bonner was interested in histones, the ubiquitous proteins around which DNA is coiled inside cells. In 1980, his studies uncovered a small histone no one had noticed before, which he called H2AX. He found closely related histones in organisms from yeast to humans and wondered whether H2AX might have an unrecognized role that had been preserved through evolution.

Bonner was determined to figure out the protein’s function. He tried a wide range of strategies altering growth and environmental conditions but made little headway until he tried exposing cells to DNA-damaging radiation. When he did, much of the H2AX inside the treated cells quickly converted to gamma-H2AX, a form of the protein bearing a function-altering chemical tag known as a phosphate.

Bonner’s team, collaborating with CCR colleague Andre Nussenzweig, Ph.D., established that H2AX is an acute sensor of a particularly harmful type of DNA damage called a double-strand break. When such damage occurs, hundreds of H2AX molecules near the break site are phosphorylated within minutes, flagging the lesions and recruiting repair proteins to the scene.

Importantly, Bonner showed that gamma-H2AX molecules can easily be detected under a microscope when they are labeled with a fluorescently tagged antibody. This finding changed the way DNA repair is studied. Previously, to visualize double-strand breaks, researchers had relied on methods that could only detect massive amounts of damage. The radiation required to produce such damage was invariably lethal, meaning researchers never had a chance to study how cells coped with lesser levels of double-strand breaks.

It was also impossible to investigate what happened at a specific site in the genome when it was damaged. But with an antibody against gamma-H2AX, they could now look at healthy cells under a microscope and pinpoint even the occasional double-strand breaks that appear with no radiation at all. For the first time, it was possible to study the dynamics of this type of DNA repair inside cells.

Laboratories around the world now use the gamma-H2AX assay developed by Bonner to study how cells sense and respond to double-strand breaks. The CCR team also used the gamma-H2AX assay to discover that cells’ genomic integrity may decline as we age in part because aging cells assemble damage repair machinery more slowly.

The team quickly recognized that the ability to detect double-strand breaks had important clinical applications, too. Because many chemotherapies kill cancer cells by causing irreparable damage to their DNA, using gamma-H2AX to assess the extent of damage in patients’ blood samples can help researchers determine the efficacy of potential cancer treatments in clinical trials. Testing for gamma-H2AX formation has also become a routine way to rapidly screen potential drugs for DNA-damaging effects in the laboratory.

Bonner and his colleagues also developed the gamma-H2AX assay into a tool for quantifying radiation exposures. The method has been used to determine how much radiation patients are exposed to during clinical procedures and could be valuable in assessing the effects of environmental radiation exposures. Now, researchers are exploring whether H2AX can be used to determine individual patients’ sensitivity to radiation, which would enable more personalized cancer treatments.

Bonner’s discovery of H2AX and the persistent work that followed have opened up the study of one of the most fundamental cellular processes. The clinical applications of the DNA damage sensor as well as the deeper understanding of basic biology it has enabled have profound implications for understanding and treating cancer.