CCR researchers pioneered the therapeutic use of a class of cytokines called interleukins, successfully harnessing their therapeutic potential to treat patients. 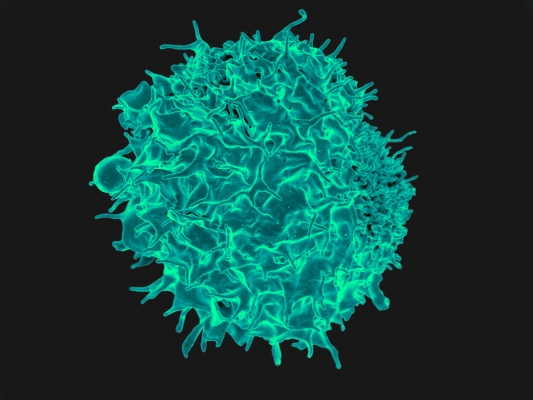 Cytokines are small proteins that carry messages between cells and are known to play a critical role in the body’s response to inflammation and immune attack. CCR researchers pioneered the therapeutic use of a class of cytokines called interleukins. In collaboration with academic and commercial partners across the country, CCR scientists have successfully led the translation of several interleukins with demonstrated therapeutic potential from the lab to the patient.

Interleukin-2 (IL-2), the first cytokine found to have therapeutic benefit, was discovered in 1976 by Robert Gallo, M.D., and Francis Ruscetti, Ph.D. The team demonstrated that this cytokine could dramatically stimulate the growth of T and natural killer (NK) cells, which are integral to the human immune response. This seminal work enabled researchers to grow and study T cells in the laboratory for the first time, changing the field of immunology forever.

CCR research groups led by Crystal Mackall, M.D., and Ron Gress, M.D., characterized another cytokine, IL-7, as a master regulator of T-cell homeostasis or equilibrium. In the first human clinical trial with IL-7, they found that the cytokine drives regeneration of T cells that are critical to the immune system but become depleted during chemotherapy. IL-7-based therapies also might restore immune function in other immunocompromised individuals, such as those with HIV and the aged, and might enhance the activity of vaccines and other cancer immunotherapies (see Development of Cancer Immunotherapy, p.12).

A third cytokine, IL-15, was co-discovered in CCR in 1994 by Thomas Waldmann, M.D., and his team. Like IL-2, it triggers the production of immune cells that attack and kill cancer cells. CCR collaborated with the NCI’s Division of Cancer Treatment and Diagnosis and the National Institute of Allergy and Infectious Diseases to produce clinical-grade IL-15 for first-in-human testing in clinical trials across the U.S. Coming full circle, it was Waldmann’s group that initiated the first IL-15 clinical trial in 2011. The results of the trial, published in 2015, showed IL-15 dramatically increased growth and activity of T and NK cells. Studies investigating the potential for IL-15 to enhance the effectiveness of vaccines against viruses that cause cancer and autoimmune diseases are underway.

The success CCR researchers have had in developing therapeutic cytokines is a reflection of the highly collaborative nature of CCR research, both among NIH colleagues and with academia and the commercial sector.