After discovering TGF-ß in 1981, CCR scientists thoroughly characterized the molecule, revealing ways it might be used to treat cancer. 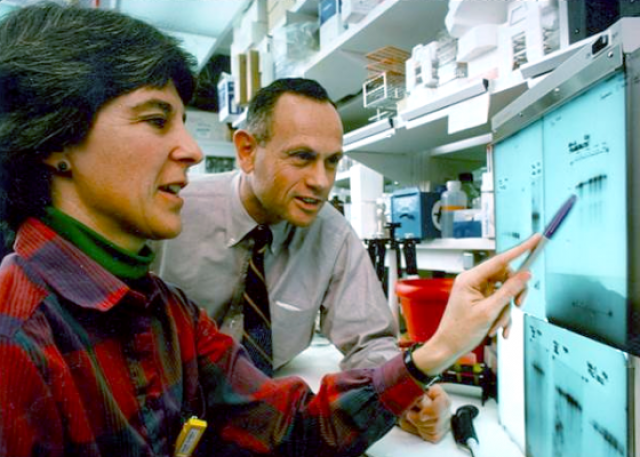 In 1981, CCR scientists discovered a molecule that both promotes and inhibits cellular growth. By thoroughly characterizing that molecule, which they called transforming growth factor (TGF)-β, they demonstrated how different biological contexts can alter a signaling molecule’s effect and revealed how TGF-β might be exploited to treat cancer. Nearly 25 years after the molecule’s discovery, the first drugs designed to treat cancer by inhibiting TGF-β signaling entered clinical trials. Today, many such drugs are being evaluated in clinical trials for the treatment of cancer and other diseases.

NCI scientists, led by Michael Sporn, M.D., and Anita B. Roberts, Ph.D., in the 1980s, found TGF-β in cancerous cells and showed that it could make healthy cells malignant. Soon after, however, they made an unexpected discovery. They found that noncancerous cells produced the tumor-promoting factor too. To solve this puzzle, the NCI investigators undertook a major effort to isolate TGF-β from human blood cells and shared the purified protein with researchers around the world in the hope of elucidating its role in cancer.

Their subsequent experiments yielded surprising results. They confirmed that TGF-β can cause excessive cell growth, but in some situations they found it suppresses growth. The opposing functions made it difficult to imagine how to treat cancer by manipulating TGF-β signaling. However, Sporn, Roberts and their colleagues eventually exposed TGF-β’s complex effects on cancer cells as well as its key roles in wound healing and immunity.

Patients who receive high doses of conventional chemotherapy and radiation can suffer from painful ulcers in their mouths and throats that increase the risk of infection and make eating, drinking and speaking difficult. Thanks to the discovery of a growth-promoting molecule called keratinocyte growth factor (KGF) by CCR investigator Jeff Rubin, M.D., Ph.D., this side effect, known as oral mucositis, is now treatable. A modified version of KGF, called palifermin (Kepivance), speeds the healing of ulcers in the mouth and throat. In 2004, it was approved by the U.S. FDA for the prevention of oral mucositis. The drug also enables patients with blood cancers to better tolerate intensive cancer treatments prior to bone marrow transplants.

Because of its interactions with context-dependent signals, TGF-β generally promotes the growth and metastasis of advanced cancers but protects against early tumor formation. Working in animal models, CCR’s Lalage Wakefield, D.Phil., who trained under Sporn and Roberts, later demonstrated that it is possible to block the tumor-promoting effects of TGF-β without affecting its normal tumor-suppressing activity.

The discovery and characterization of TGF-β is one of CCR’s many contributions to the deep understanding that scientists now have of cancer’s elaborate signaling networks—knowledge that drives the development of targeted treatments.

Other CCR breakthroughs in cancer signaling include studies of the oncogene HRas by Doug Lowy, M.D., which demonstrated how mutations can convert a gene involved in normal growth regulation into a driver of cancerous growth; the discovery by George Vande Woude, Ph.D., that overactive signaling from the Met gene renders cells tumorigenic and metastatic; and the demonstration by Stuart Aaronson, M.D., that the HER2 gene can cause normal cells to behave like aggressive cancer cells. These genes can be critical lynchpins in different signaling networks and are the targets of several approved cancer treatments, as well as experimental drugs now under investigation.