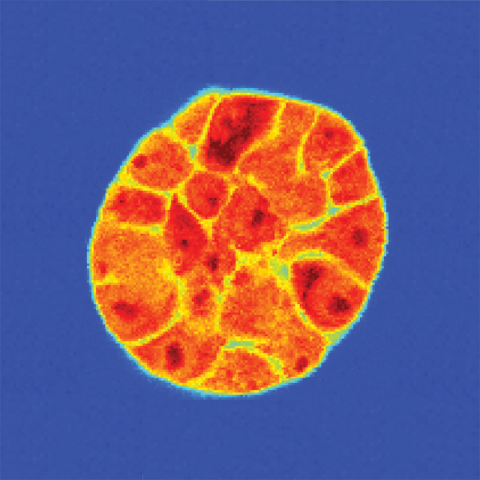 CCR scientists have shown that a non-invasive technique called Brillouin microscopy can be used to explore how a cell’s mechanical properties are shaped by external cues from its environment. The approach will help researchers investigate what makes some cancers spread aggressively while others remain harmless for years or decades. The research was published September 3, 2022, in the Biophysical Journal.

Kandice Tanner, Ph.D., a senior investigator in the Laboratory of Cell Biology, explains that cells’ mechanical properties — their stiffness and viscosity, for example — have such a profound influence on their behavior that changes to these properties are likely key to cancer’s growth and progression. For example, cancer cells tend to be more pliable than their healthy counterparts, which is thought to help them slip through tissues and migrate to distant sites in the body.

Tanner’s hope is that biomechanical information might one day help clinicians predict whether a patient’s tumor is likely to metastasize and if it does, where metastatic tumors are most likely to emerge. To get there, researchers need a better understanding of how mechanical properties shape cancer cells’ behavior, as well as the factors that cause those properties to shift.

For the study, Tanner collaborated with Giuliano Scarcelli, Ph.D., a bioengineer at the University of Maryland, College Park, to explore cells’ viscoelasticity, which determines how quickly a cell bounces back to its original shape after it has been distorted. Researchers usually measure cells’ viscoelasticity by monitoring them after they have physically disturbed their form — by pinging them with microscopic beads or applying gentle suction to their surfaces, for example.

Another way of assessing viscoelasticity is a technique called Brillouin microscopy, which tracks the way light scatters when it hits materials. The technique was originally developed to study the mechanical properties of non-biological materials, but Tanner and others are finding that it is also useful for studying cells. “Brillouin microscopy has the advantage over the other methods in that it is completely non-invasive,” she says.

Tanner, Scarcelli, and graduate student Miloš Nikolić showed that Brillouin microscopy can be used to investigate the mechanical properties of cells growing in complex three-dimensional structures, which are difficult to study using other mechanobiology techniques. This is important because cells can alter their mechanical properties in response to their environment. “We're really probing what a cell senses in the context of a tissue, and we're doing it under different microenvironmental cues that mimic what the cells would see in a living animal,” Tanner says.

Paired with a method developed in Tanner’s lab called optical tweezer microrheology, which uses microbeads to apply forces to the cells with great precision, researchers can explore mechanical properties at both cellular and subcellular scales. While the team’s early experiments were done with cells grown in the lab, Tanner imagines that non-invasive techniques like Brillouin microscopy might one day be used to examine the mechanical properties of patient tumors.