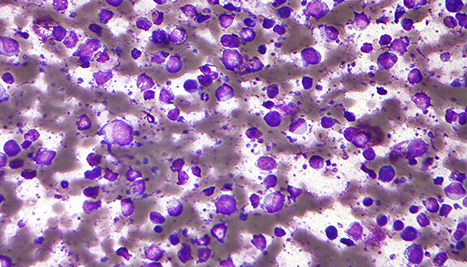 A genetic analysis developed by CCR researchers can now be used to assign patients with diffuse large B-cell lymphoma (DLBCL) to one of seven different genetic subtypes of the disease. Laboratory studies have revealed significant differences between DLCBL cells from each of these subtypes, suggesting they are likely to respond differently to potential targeted therapies. Understanding these distinctions could help researchers identify the best treatments for individual patients with DLBCL.

Currently, patients diagnosed with DLBCL, the most common type of lymphoma, are treated with the same standard chemotherapy regimen. But there is a great deal of variation among DLBCL cases, both in the genetic and biological nature of the cancers and in their response to treatment. By classifying patients’ DLBCL into genetic subtypes, researchers will be better able to understand the results of clinical trials evaluating experimental targeted therapies for the disease.

The new tool for classification, described April 13, 2020, in Cancer Cell, builds on two decades of research on the diverse nature of DLBCL led by Louis M. Staudt, M.D., Ph.D., Chief of CCR’s Lymphoid Malignancies Branch. In 2018, Staudt’s team found that it could use sets of genetic abnormalities in tumor cells to cluster DLBCL cases into four subtypes. Now, the team has identified additional subtypes that are less common but just as clearly defined by shared sets of genetic features. Patients’ tumors can be assigned to one of the seven subtypes by sequencing DNA and assessing about 100 potential genetic abnormalities.

Staudt explains that the most immediate application of the new finding will be in interpreting the results of future clinical trials, such as a current NCI trial that investigates patients’ response to a combination of five targeted drugs for DLBCL (known together as ViPOR, part of the Cancer Moonshot initiative). With the new genetic classification system, the research team will be able to consider the treatment’s impact on each group independently and determine whether it is effective for particular subtypes.

“The essence of this is to have a full understanding of this very heterogenous set of cancers that we are currently treating with the same chemotherapy regimen,” Staudt says. “Our early phase clinical trials are teaching us that certain targeted therapies will be particularly beneficial in some subtypes but not others.”

As part of the current study, the researchers identified all of the genes that are essential for the survival of cell line models of each of the three most common DLCBL subtypes, pointing toward drug targets that may be effective for each group.