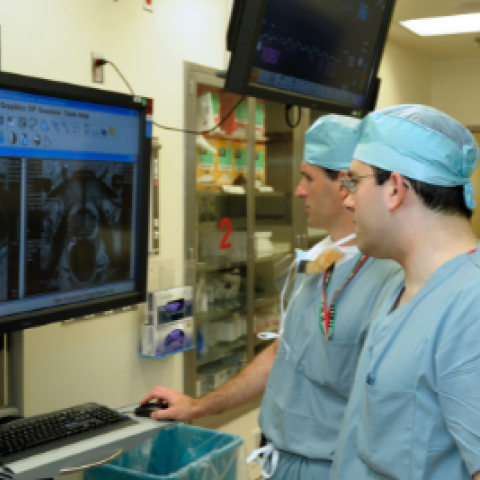 A more personalized approach to prostate cancer diagnosis could allow many men to undergo less invasive biopsy procedures without compromising accuracy, CCR scientists have found. Combining magnetic resonance imaging (MRI)-guided biopsy with traditional systematic biopsy can find clinically significant cancers that might go undetected if just one biopsy technique is used — but only a subset of patients benefits from this approach, researchers reported April 11, 2021, in European Urology Oncology. According to the new finding, magnetic resonance imaging can be used to determine which biopsy approach is appropriate for an individual.

This research, led by Peter A. Pinto, M.D., Investigator in the Urologic Oncology Branch (UOB), represents a step forward in personalized medicine, says Michael Ahdoot, M.D., who authored the study as a clinical fellow in UOB. “You can now use MRI findings to not only target tumors for biopsy, but to also choose your biopsy strategy so that you minimize interventions while still maintaining the accuracy that you get from more invasive biopsy techniques,” he says.

For their new analysis, Ahdoot and colleagues took a closer look at the data from the earlier study. Using data from 926 study participants, the team analyzed biopsy outcomes within each of four risk groups based on participants’ MRI scans, which were scored using the Prostate Imaging Reporting & Data System (PI-RADS). Each participant had received both a traditional systematic biopsy and an MRI-guided biopsy, but the team found that this combined approach only improved cancer detection in the group with intermediate risk scores (3 or 4).

Personalizing the diagnostic strategy according to these findings would mean 40 percent of men who need prostate biopsies would get either traditional systematic or MRI-guided biopsies, rather than both. "Our prior CCR research established the role of prostate MRI to see cancer within the prostate. This work gives physicians the tools to know how to best use MRI to diagnose prostate cancer when a biopsy is indicated," Pinto says. "We are now examining how this can help us develop better ways to treat prostate cancer."