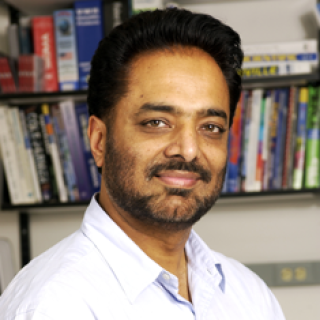 Shiv Grewal investigates the mechanisms of heterochromatin assembly and their roles in maintaining genome stability using the fission yeast Schizosaccharomyces pombe as a model system. A major focus is the role of RNAi in processing transcripts generated from repetitive elements at centromeres, telomeres and the mat locus to target and establish constitutive heterochromatin at these regions. Recently, his lab has begun to elucidate the role of RNAi-dependent and RNAi-independent mechanisms in establishing facultative heterochromatin in different parts of the genome.

Yawen Bai investigates the mechanism of protein folding and chromatin dynamics using biophysical techniques, including nuclear magnetic resonance (NMR). His research is focused on determining high-resolution structures of protein folding intermediates, histone variants in complex with their chaperones, and nucleosomes in complex with nucleosome-binding proteins. His laboratory also helps other NCI investigators determine the structures of proteins to aid in cancer drug design.

Alex Kelly investigates the mechanisms by which chromatin structure and modification coordinate the key events of mitosis. He employs a combination of biochemical reconstitution, structural biology and cell biology to understand how localized biochemical reactions on chromosomes are initiated and controlled to ensure high-fidelity chromosome segregation.

Chongyi Chen investigates the mechanistic link between DNA topology, chromatin structure and gene expression, from a single-cell and genome-wide perspective. The lab develops and employs cutting-edge technology in single-cell omics and imaging to study chromosome biology in mammalian systems.

Bruce Paterson pioneered the use of cell-free protein synthesis systems in the analysis of gene function. He co-developed the wheat-germ cell-free protein synthesis system, one of the first methods used to analyze functional mRNA levels in normal and transformed cells and tissues. He has been a major contributor to the study of myogenesis in both vertebrates and in Drosophila, and was one of the first to demonstrate RNAi knock-down to study gene function during Drosophila development.