A New Player on the Scene

A screen for hundreds of epigenetic regulators has turned up a novel approach for treating a pediatric cancer. 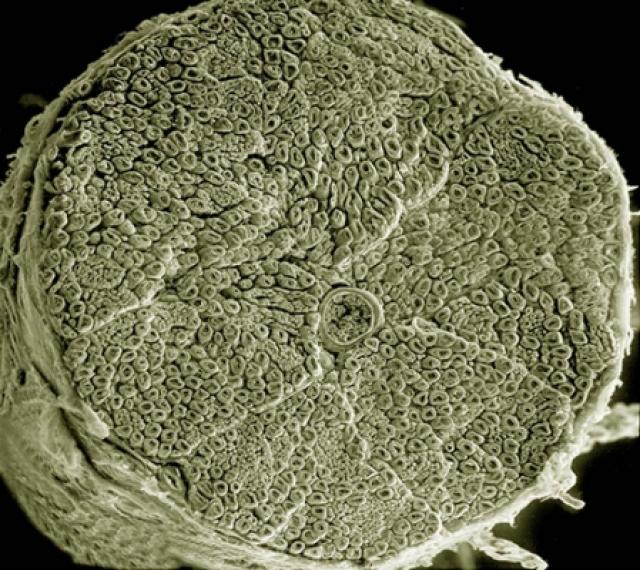 A scanning electron micrograph of a section through a human spinal nerve. In the center is a blood vessel filled with red blood cells. Neuroblastoma occurs in certain types of nerve tissue, including tissue in the neck, chest, abdomen or spine.

Neuroblastoma is a rare disease, but it accounts for 15 percent of all childhood cancer deaths. Some neuroblastomas respond well to treatment, but about 40 percent of patients have a high-risk subtype, which tends to return even after chemo­therapy. Frustratingly, DNA sequencing of patients’ tumors has turned up few leads to point researchers toward strate­gies for developing more targeted therapies. Carol Thiele, Ph.D., Deputy Chief of CCR’s Pediatric Oncology Branch, and her team have now found new targets for better therapies for the most life-threatening form of this pediatric cancer.

Taking a new approach, as reported in Cancer Cell, Thiele and her colleagues screened hundreds of epigenetic regu­lators—enzymes that influence a cell’s genetic activity by modifying DNA or the proteins that package it—in search of any that contribute to the growth of neuroblastomas. They found dozens that do, and their detailed analysis of one of these, a protein called SETD8 that has not previously been linked to cancer, suggests a new strategy for stopping the growth of this aggressive tumor subtype.

Thiele and her colleagues turned to epigenetic regulators as a source of potential drug targets because it is widely known that these proteins play a crucial role in determining whether stem cells maintain their ability to divide, or instead, differentiate, taking on the characteristics of more mature cells. For stem cells in a developing nervous system, including the neuroblasts from which neuroblastomas arise, the ability to self-renew is critical, but cancerous cells that retain this ability spur tumor growth and can be partic­ularly difficult to eliminate. It is well known, Thiele says, that the most dangerous neuroblastomas are those whose cells remain undifferentiated.

A tell-tale sign that a neuroblastoma cell has begun to differentiate is the development of long, thin extensions that project from its cell body. Thiele and postdoctoral fellow Veronica Veschi, M.D., Ph.D., worked with CCR’s High-Throughput Imaging Facility to develop an automated method to analyze these projections based on microscope images so they could efficiently assess differentiation in large numbers of cells. Then they used genetic tools to switch off each of 400 different epigenetic regulators so they could determine how each one impacted the growth and differen­tiation of neuroblastomas.

That screen identified more than 50 epigenetic-regulating genes that help keep neuroblastoma cells in a dangerous state of self-renewal, including 16 that also seem to block their differentiation. The team was most interested in genes whose products could be blocked with the kinds of small molecules that make effective drugs, so they conducted another screen, this time using a library of 21 chemicals known to target epigenetic regulators.

Of those, the compound with the most profound effect on the growth and differentiation of neuroblastoma cells blocked the SETD8 protein. Working with colleagues in CCR’s Laboratory of Cell Biology, Genetics Branch and NCI’s Center for Biomedical Informatics and Information Tech­nology to investigate SETD8’s function, the team learned that the protein dials down production of p53, an important tumor suppressor.

Thiele and her colleagues are hopeful that blocking SETD8 in patient tumors might reactivate the p53 pathway and inhibit the growth of neuroblastomas. The inhibitor used in the team’s experiments needs further development before it can be considered for clinical testing, but the team has already shown that blocking SETD8 slows the growth of human neuroblastoma tumors implanted in mice.