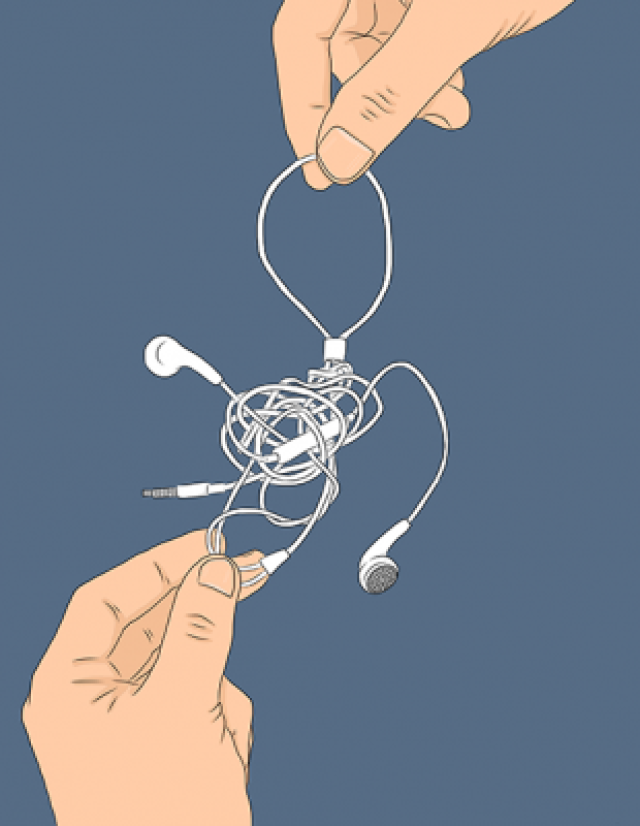 The headphones in this image depict the inherent ‘knotting’ problem that arises during chromatin loop formation as DNA is channeled through a cohesin-extrusion complex, represented here as a two-way slider. Loosely entangled DNA outside of the loops are converted to tighter knots as chromatin is continuously fed through the motor of the extrusion complex. The mass of jumbled DNA can only be resolved by the action of proteins like Topoisomerase 2B that act as enzymatic scissors to disperse the entanglement of intertwined DNA. The DNA breaks by Topoisomerase 2B occasionally serve as precursors that lead to chromosomal translocations.

Packing an entire genome inside the cramped quarters of a cell nucleus involves organizing long chromosomes into smaller loop domains. This compaction can put chromosomes at risk for damage, according to new research led by André Nussenzweig, Ph.D., Chief of CCR’s Laboratory of Genomic Integrity. The findings suggest that DNA breaks are routinely introduced and then repaired as a cell folds and organizes its genome. When repair processes fail, these breaks can give rise to chromosomal abnormalities characteristic of cancer cells.

One of the most essential activities in a cell is the ability to repair broken DNA. Even temporary breaks created during routine cellular activities are opportunities for lasting damage. Broken DNA strands are usually swiftly repaired, but they can sometimes be reconnected inappropriately, fusing together bits of different chromosomes in an event known as a translocation. This can lead to an imbalanced regulation of genes. Some translocations spur cellular growth and support the survival of cancer cells.

It has long been known that certain chromosome translocations show up in cancer cells again and again. To assess whether these might be common because they arise at fragile sites where DNA breaks are common, Nussenzweig and his collaborators set out to identify all the sites in the genome where one DNA-cutting enzyme, called Topoisomerase 2 (Top2), creates such breaks.

Using a method developed in Nussenzweig’s laboratory to identify all of the sites in the genome where Top2 creates DNA breaks, the researchers uncovered a clear pattern. “We found that the initial breakage actually correlates very nicely with where the translocation eventually occurs,” Nussenzweig says. The researchers also established that DNA cuts were frequently located near the base of loops that bring distant parts of a DNA strand together to facilitate chromosome organization.

Notably, Nussenzweig says, they found that DNA breaks often occured in genes that were not in active use by cells. “Prior to this finding, translocations have been linked to either transcription or replication problems,” he says. “We were very surprised that the damage we saw was independent of both of those, but rather, related to problems during chromosome folding.”

In this video, Nussenzweig and his colleagues explain how the intricate architecture in the cell nucleus makes specific DNA sites more susceptible to breaks that, if not properly fixed, can lead to cancer.