Keeping blood vessel-supporting cells in working order could reduce the risk of metastasis. 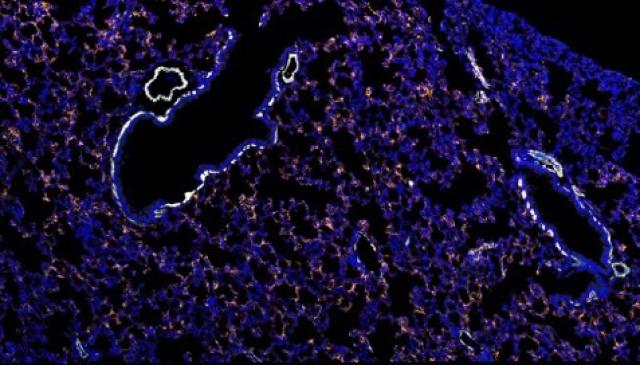 This image represents the early changes that occur in the lung in response to a localized primary tumor distant from the lung. These changes involve perivascular cells (orange) that are normally found around blood vessels (yellow) where they support vessel development and function. In individuals that have a primary tumor, these perivascular cells move away from blood vessels and create an environment that supports tumor cells that have left the primary tumor for a new site, ultimately leading to metastasis.
Credit: Rosandra Kaplan, CCR, NCI, NIH

Tumors—even small ones that have not spread—trigger changes in the body well beyond their immediate surround­ings. CCR scientists have now discovered that when a tumor grows locally in the body, cells in lung tissue dedicated to supporting blood vessels and regulating blood flow can take on a harmful new role: altering the structure of tissue to render it more hospitable to metastasizing tumor cells.

Rosandra Kaplan, M.D., an Investigator in CCR’s Pediatric Oncology Branch, and her postdoctoral fellow Meera Murgai, Ph.D., found that they could dramatically reduce metastasis in mice by disabling this behavioral transformation in the distal renegade cells. Their findings, published in Nature Medicine, suggest a new strategy for preventing metastatic tumors from taking hold.

In animal studies, Kaplan and Murgai discovered that peri­vascular cells, best known for their role in maintaining healthy blood vessels, are critical for the establishment of a pre-metastatic niche for migrating tumor cells. These perivascular cells are usually found wrapped around the outside of blood vessels where they carry out a number of functions, including regulating the vessels’ size and permea­bility. They also leave the periphery of blood vessels at times to aid in wound healing and tissue regeneration. Their func­tions beyond vascular support have been difficult to study, however, because when these cells take on alternate roles, they stop producing the surface markers that scientists typi­cally use to identify them. As a result, their involvement in metastasis has been underappreciated.

To track the cells’ behavior, Murgai studied mice whose perivascular cells had been engineered to produce an easy-to-follow fluorescent protein. When she injected tumor cells into the leg muscles of those mice, she saw bright yellow-tagged perivascular cells in the lungs leave the blood vessels and redistribute themselves through other parts of the lung tissue. The cells switched on new genes and changed their behavior, most notably generating large amounts of an extracellular matrix protein called fibronectin. Adding fibronectin to the extracellular matrix makes it easier for the cells to grab onto and crawl upon, creating a microenvironment tumor cells can more easily colonize, Kaplan explains.

The researchers found they could prevent this behavior by switching off a gene called KLF4, which encodes for a gene regulatory protein that manages transcription of many other genes and is important for perivascular cells’ ability to turn rogue. When they forced perivascular cells to maintain their usual roles by disabling KLF4, mice with tumors growing in their muscle tissue developed very few metastases in the lungs. Blocking tumor cells’ ability to interact with fibronectin similarly reduced metastasis, suggesting a modi­fied extracellular matrix is critical for tumor cells’ survival once they reach the lungs.

Kaplan notes that the mice used for the study develop meta­static tumors quickly when KLF4 is left intact, making them a good model for studying what happens in patients with highly metastatic disease. She is hopeful that preventing the detrimental shift in behavior of perivascular cells in patients may reduce the risk of metastatic disease.