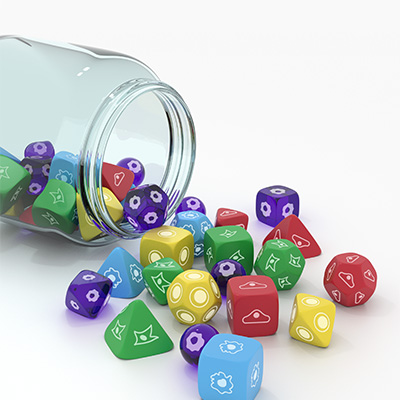 Liver cancers are molecularly and biologically heterogenous, which contributes to their therapeutic failures and lethal outcomes. Wang and his team have developed a single-cell-based approach to determine tumor cell communities (depicted as dice emptying out of a jar) and uncover a unique liver cancer ecosystem relevant to immune therapy. A tumor cell community is depicted by dice with different colors and shapes, where color represents cell type and shape represents unique molecular properties.
Artwork credit: Ethan Tyler, Medical Arts, NIH

Patients whose liver cancers responded well to immune checkpoint inhibitors in clinical trials had tumors with less cellular diversity than cancers that were not responsive to this type of therapy, CCR scientists have discovered in a new Cancer Cell paper. Understanding how a tumor’s cellular composition impacts its response to therapy could help researchers devise more effective treatments for people whose liver cancer is unlikely to respond to checkpoint inhibitors alone.

Unlike most cancers, liver cancer has become more prevalent in the United States over the last several decades. So far, attempts to develop targeted therapies for liver cancer have been frustrating, says Xin Wei Wang, Ph.D., Deputy Chief of CCR’s Laboratory of Human Carcinogenesis and Co-Director of CCR’s Liver Cancer Program. While several such treatments have been approved by the U.S. Food and Drug Administration, they usually extend patients’ lives by just a few months, and the prognosis for the disease remains poor.

Liver tumors, like most solid tumors, contain complex communities of cells, and Wang says understanding this diversity is important for developing effective new treatments. A single tumor can contain millions of cancerous cells, intermingled with nonmalignant cells such as immune cells and connective tissue-generating fibroblasts. There’s additional diversity among the cancer cells themselves, which can acquire new mutations as a tumor grows. To begin to understand these cellular communities, Wang and his colleagues identified the complete set of RNA molecules embedded in thousands of individual tumor cells, then used the data to assess each tumor’s cell-to-cell variation.

The team analyzed liver tumor samples from patients who received immune checkpoint inhibitors through clinical trials at the NIH Clinical Center in Bethesda, Maryland. The trials were led by Tim Greten, M.D., Deputy Chief of CCR’s Thoracic and GI Malignancies Branch and Co-Director of CCR’s Liver Cancer Program, as a pilot project for the Cancer Moonshot initiative. A small percentage of patients responded well to the treatment, seeing their cancer go into remission for years.

After working closely with clinical staff to analyze tumor biopsies, Wang’s team used a technique called single-cell RNA sequencing to profile thousands of individual cells and assess the cellular diversity within the patients’ tumors. This approach uncovered a surprisingly clear relationship between a tumor’s heterogeneity and patient outcomes.

Wang says when he and postdoctoral fellow Lichun Ma, Ph.D., a bioinformatician and lead author of the study, saw the data they were nearly speechless. The eight samples the team had analyzed could be readily sorted into two groups: Those with the highest cellular diversity came from cancers that were not responsive to the immunotherapy, whereas those with low cellular diversity came from patients whose cancers had responded well.

High-diversity tumors might achieve this by way of a protein called vascular endothelial growth factor (VEGF), which the team found was produced in greater abundance in these tumors than in low-diversity tumors. Now, Wang and his colleagues hope they may be able to reverse these tumors’ effects on their microenvironment by inhibiting VEGF, thereby increasing the likelihood that patients with high-diversity liver tumors will respond to immunotherapy. In fact, some clinical trials are already testing treatments that combine VEGF inhibitors with checkpoint inhibitors—a strategy that Wang says is now backed by a strong scientific rationale.