Four years after CCR investigators began testing avelumab, the drug became the first approved for treatment of a rare disease. 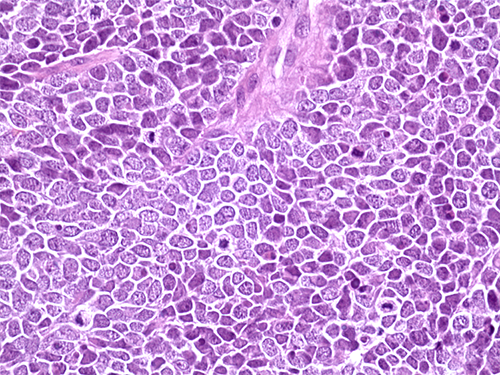 Hematoxylin and eosin staining of a tissue section from a Merkel cell carcinoma tumor from a patient treated with avelumab at NCI. Credit: Isaac Brownell, CCR, NCI, NIH

In 2017, four years after early-phase clinical trials of the new immunotherapy drug avelumab began at the NIH Clin­ical Center, the U.S. Food and Drug Administration (FDA) approved the therapy for the treatment of Merkel cell carci­noma. It is the first FDA-approved treatment for this rare but aggressive skin cancer, which is diagnosed in about 2,500 people a year in the United States.

A large team of CCR scientists was instrumental in testing avelumab, generating preclinical evidence of the drug’s effects and conducting its first-in-human trials. A collabora­tion between CCR and EMD Serono Inc., the manufacturers of avelumab, ensured that testing proceeded efficiently, allowing patients quicker access to the new drug.

Avelumab, which is marketed as Bavencio, boosts the immune system’s ability to destroy cancer cells by binding to a molecule on tumor cells called PD-L1, which, if unbound, blocks T cells from mounting an attack. Avelumab’s presence prevents PD-L1 from interacting with immune cells, freeing them to destroy their tumor targets.

These findings, along with evidence that Merkel cell carci­nomas are susceptible to immune control, suggested avelumab might be an effective treatment for this cancer. In cooperation with EMD Serono, investigators led by Schlom and James Gulley, M.D., Ph.D., Chief of the Genitourinary Malignancies Branch, planned a clinical study.

Because Merkel cell carcinoma is so rare, no potential treat­ment for the disease had yet been successfully evaluated in a clinical trial. But the CCR team was able to get the first trials underway quickly at the NIH Clinical Center, which special­izes in rare diseases and draws patients from all over the world. Within eight months, the team obtained the safety and dosing data needed for the next phase of the study.

Ultimately, 88 patients with chemotherapy-resistant Merkel cell carcinoma participated in the clinical study, which included 35 cancer centers worldwide. Avelumab caused tumor regression for 33 percent of participants, including eight whose tumors disappeared entirely. Isaac Brownell, M.D., Ph.D., an Adjunct Investigator at NCI and Head of Cutaneous Development and Carcinogenesis Section at the National Institute of Arthritis and Musculoskeletal and Skin Diseases, led the trial at the NIH Clinical Center. Brownell and his colleagues reported their results in Lancet Oncology, showing that 27 of the 28 patient responses lasted for at least six months and many lasted over a year.

Based on these results, the FDA granted accelerated approval for avelumab in March 2017. Trials are ongoing, and at the American Society for Clinical Oncology annual meeting in June 2017, Brownell and colleagues reported preliminary data suggesting that when the drug is given as a first-line therapy for Merkel cell carcinoma, response rates are even higher than those achieved in the original trial, which tested patients on avelumab only after their previous treatments had stopped working.

Testing avelumab first in patients with this rare disease helped speed the drug’s initial approval by the FDA. While the Merkel cell carcinoma trials were underway, Gulley, Andrea Apolo, M.D., an Investigator in the Genitourinary Malignancies Branch, and colleagues were also investigating the drug’s effects in patients with advanced bladder cancer. In that trial, tumors shrank in 18 percent of patients after six months of treatment, and the FDA approved the drug for use in patients with advanced bladder cancer in May 2017. Now, more than 80 clinical trials are investigating whether this new immunotherapy will be an effective treatment for a wide range of other cancers. The combined efforts in CCR that led to the approval of avelumab in two cancers received a 2018 Federal Laboratory Consortium for Technology Transfer National Award.