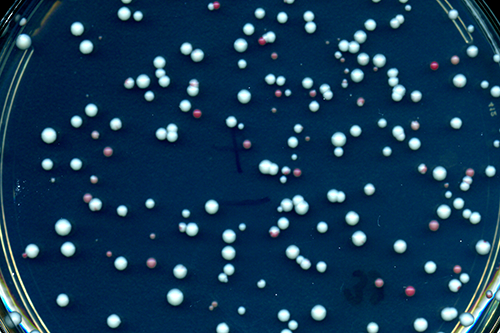 Uniparental disomy occurs when cells contain two copies of a chromosome from one parent and none from the other parent. In this picture, uniparental disomy has occurred in the red and pink yeast colonies but not in the white colonies. Credit: H. Diego Folco, CCR, NCI, NIH

There are a lot of ways things can go wrong when a gene gets switched on at the wrong time or place. New research from the Laboratory of Biochemistry and Molecular Biology, under the guidance of Chief Shiv Grewal, Ph.D., shows that when a gene whose activity should be reserved for the production of sex cells becomes active, cells can’t properly sort their chromosomes when they divide. As a result, new cells may wind up with too many chromosomes from one parent and not enough from the other—a genetic disruption that is common in cancer cells.

Grewal and his colleagues reported in Nature that the incorrect expression of gametogenic genes—those involved in meiosis, the specialized cell division process that gives rise to sperm and eggs—can result in this chro­mosomal abnormality known as uniparental disomy (UPD). Instead of inheriting one member of each paired chromo­some from mom and dad as they should, cells affected by UPD receive both copies of a particular chromosome from the same parent. Although it has been known for years that UPD contributes to several human diseases and may support the uncontrolled growth of cancer cells, its cause has been elusive.

Because cells affected by UPD contain the expected number of chromosomes, the phenomenon is not easy to recognize and study in human cells. Grewal and his colleagues chose to investigate the causes of UPD in fission yeast, an organism whose genetic material is easier to track since the fission yeast genome is contained on only three chromosomes. Fission yeast also shares many features of chromosome structure and gene regulation with human cells, making it a useful model for studying cell division and genetic processes.

The new discovery grew out of an observation Grewal made nearly 20 years ago. His insight dawned while studying how components of a gene-regulating system called RNA interference (RNAi) influenced DNA packaging inside cells. When yeast cells divide and the system is impaired, they often produce new cells with incorrectly segregated sets of chromosomes, including cells affected by UPD.

Grewal initially suspected the chromosome problems in the impaired cells had something to do with DNA packaging. But when he and Staff Scientist H. Diego Folco, Ph.D., inves­tigated, they found no such link. Instead, they discovered that the chromosome problem arose from the failure of the RNAi machinery to carry out another critical role: keeping unneeded genes turned safely off.

Fission yeast typically turn on their meiotic genes when stressful living conditions trigger a shift from asexual to sexual reproduction. At other times, they are actively repressed. Folco’s experiments revealed that the untimely expression of just one meiotic gene during times of asexual growth could disrupt chromosome segregation and lead to UPD.

Grewal proposes similar disruptions could cause UPD in human cells. Hundreds of human genes encode proteins that are needed exclusively for meiosis. These genes are present in every cell in the body, but they are only used to produce sperm and eggs, so outside the ovaries and the testes, they are usually kept off. Our cells’ gene-silencing systems may become less reliable as we age, however, increasing the risk that meiotic genes will become active and trigger UPD. In fact, researchers have noticed that many genes usually expressed only in the testes are frequently active in tumor cells, although the impact of this abnormal gene activity has not been clear.

By uncovering the cause of UPD, Grewal and his team have provided a foundation for understanding its role in cancer. They now plan to search for small molecules that can inter­rupt UPD in yeast, a step toward identifying a way to inter­vene in UPD-associated disease processes.