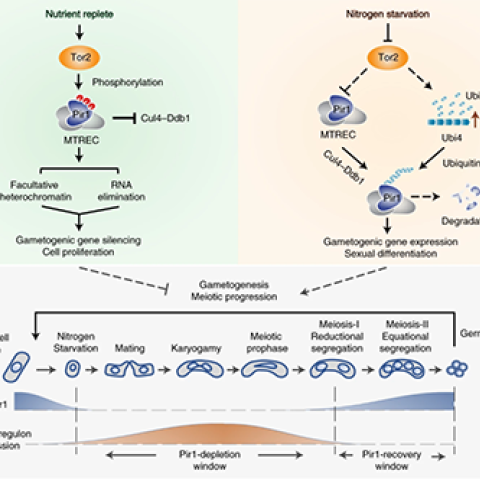 Researchers led by Shiv Grewal, Ph.D., Chief of the Laboratory of Biochemistry and Molecular Biology, have uncovered a mechanism by which a protein complex, called TOR, controls gene expression programs that drive cell division and the accurate segregation of chromosomes. The finding, published Feb. 11, 2021, in Nature Cell Biology, was in fission yeast cells, but it could hold important implications for understanding how cancer and some genetic disorders occur in humans.

Dr. Grewal, like many scientists, is interested in studying the TOR protein complex because it has long been known to play a role in cancer development, a process which is characterized by the uncontrolled division of abnormal cells.

In healthy cells, when enough nutrients are available, TOR signals cells to begin dividing and proliferating. “But many cancer cells will hyperactivate TOR, and those cells will continue to divide, even under nutrient-poor and stressful conditions,” Grewal explains.

It was unclear how the TOR protein complex drives the uncontrolled growth of cancer cells. But Grewal and his colleagues discovered that TOR can drive cell division by targeting an RNA processing complex called MTREC (PAXT in humans) that is critical for accurate gene expression and proper chromosome segregation during cell division.

Specifically, the researchers found that the TOR complex phosphorylates a protein in the MTREC complex. This process stabilizes MTREC, which in turn controls gene expression and cell proliferation.

In their study, the researchers manipulated the MTREC protein in a way that mimics the phosphorylation typically done by TOR. As a result, the cells continued to divide even though they were in a nutrient-depleted environment. “That’s very similar to what you see in cancer cells,” Grewal notes.

Moreover, the team found that deactivation of TOR during a brief but critical window of time is essential for the generation of reproductive cells via a specialized type of cell division. This brief deactivation is important for proper gene expression and normal segregation of chromosomes. This finding holds key implications for understanding some genetic disorders associated with abnormal chromosome segregation, such as Down syndrome.

Moving forward, Grewal wants to confirm these results in the cells of mammals, including human cells. “Since TOR is frequently activated in cancer cells, our findings have major implications for understanding how the signaling pathway contributes to uncontrolled tumor growth in humans,” he says.

While some cancer drugs that target TOR exist, this new, more detailed knowledge of the TOR pathway could one day pave the way for more targeted therapies.