Different and the Same 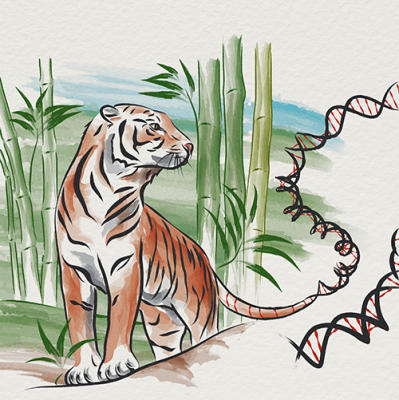 The Thailand Initiative in Genomics and Expression Research for Liver Cancer Consortium (depicted as a tiger) emerges from the foliage, representing molecular, clinical and epidemiological studies from teams in the U.S., Thailand and Japan, that generate a multilayered genomic and genetic liver cancer data ecosystem (represented by the tiger’s tail). Although common molecular subtypes (depicted as bamboo stalks) are observed among liver cancer types, there are differences observed between Asian and Caucasian populations. Credit: Ethan Tyler, Medical Arts, NIH

CCR scientists have found surprising molecular similarities between two types of liver cancer, hepatocellular carcinoma (HCC) and intrahepatic cholangiocarcinoma (ICC), which were traditionally thought of as quite distinct. The finding suggests that a unified clinical approach could benefit patients with either type of liver cancer.

Liver cancer is the second leading cause of cancer death worldwide. In the United States, about 80 percent of liver cancers are HCC, which originates from the liver’s primary cells, hepatocytes. ICC, which develops from the cells that line bile ducts (cholangiocytes), is much less common. HCC and ICC look different under a microscope and have long been considered distinct diseases.

Xin Wei Wang, Ph.D., Deputy Chief of CCR’s Laboratory of Human Carcinogenesis, says different clinical guidelines are used to manage HCC and ICC, and different drugs are currently recommended for their treatment. Therapeutic options are limited for both diseases, however, and the prognosis for patients with liver cancer is generally poor. There is an urgent need for new therapies.

For many years, Wang has collaborated with clinical centers in Thailand where liver cancer is a primary cause of cancer-related mortality. Through the Thailand Initiative for Genomics and Expression Research in Liver Cancer (TIGER-LC), this consortium of researchers and clinicians from CCR and five cancer hospitals in Thailand is creating a comprehensive liver cancer biorespository of tumor samples and clinical data. Unlike in the rest of the world, the most common form of liver cancer in northeastern Thailand is ICC, enabling the consortium to investigate similarities and differences between that disease and HCC.

In new research, Wang, the lead researcher on the study, and Mathuros Ruchirawat, Ph.D., Vice President of the Chulabhorn Research Institute (CRI) in Bangkok, analyzed the genome sequences, gene activity and metabolic profiles of 199 tumor samples from patients in Thailand. The CRI is actively led by Her Royal Highness Princess Chulabhorn Mahidol of Thailand, Ph.D.

The team used the data to identify molecular subtypes of either type of liver cancer. Surprisingly, Wang says, the molecular features that defined certain subsets of ICCs closely resembled subsets of HCC.

“Those subtypes not only have very similar gene expression fingerprints and similar tumor biology, they also have similar clinical outcomes,” Wang says. Examining a broader set of liver tumor samples, the team found that several of the subtypes they identified in their original analysis were represented among patients of all ethnicities, but some occurred only among Asians.

Recognizing common molecular subtypes of liver cancer could help researchers treat the disease more effectively, regardless of whether a patient has been diagnosed with HCC or ICC. In the near term, Wang says, the findings will help researchers identify patients with particularly aggressive liver cancers and recommend appropriate treatments. Additionally, genetic mutations that the team has identified as possible drivers of specific subtypes may point researchers toward strategies for developing targeted treatments.

A New Player in Liver Cancer

Although cancer is generally thought to be driven by changes in a handful of genes, tumor cells often contain altered levels of thousands of different RNA molecules. A study from Wang’s team has identified a feature of liver cancer cells that may be to blame for these widespread disruptions: dramatic changes in the levels of RNA-binding proteins. After showing that RNA-binding protein levels were widely skewed in liver cancers, the team determined that excess levels of one of these proteins, negative elongation factor-E (NELF-E), enhances signaling of the oncogene c-Myc, which promotes cancerous growth. Disrupting NELF-E’s interactions with its RNA targets or the c-Myc protein could be a strategy for new anticancer therapies.