Snapshot of a Cellular Machine

Visualizing a DNA-cutting complex in extraordinary detail reveals how it binds to target DNA and changes its shape. 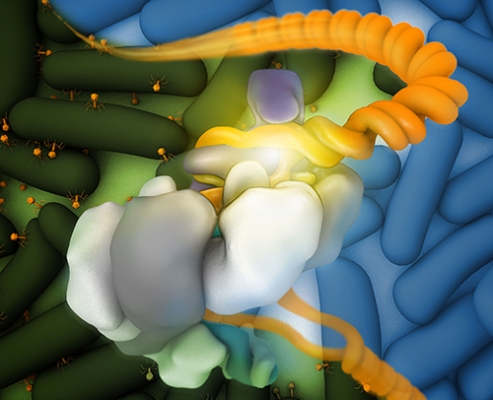 Using the Nobel-prize winning technique of cryo-electron microscopy (cryo-EM), researchers led by CCR Senior Investigator Sriram Subramaniam, Ph.D., have captured a series of highly detailed images of a protein complex that bacteria use to recognize and destroy foreign DNA.

The DNA-cutting complex is part of the CRISPR system that bacteria use to protect themselves against viruses and other foreign invaders. As part of this defense system, the surveillance complex recognizes foreign DNA and triggers its destruction. In recent years, researchers have adapted the CRISPR system into a powerful tool for genome editing, which is used for a wide variety of applications, including correcting disease mutations.

In a new study reported in Cell, Subramaniam and his team, including postbaccalaureate student Tai Wei Guo and CCR Associate Scientist Alberto Bartesaghi, Ph.D., collaborated with Memorial Sloan Kettering Cancer Center’s Dinshaw Patel, Ph.D., and his postdoctoral fellow Hui Yang, Ph.D., to investigate the structural basis of one CRISPR surveillance complex’s interaction with DNA. They learned how anti-CRISPR proteins produced by a viral invader block the system’s ability to recognize its target.

To illuminate how the CRISPR complex changes its shapes as it does its job, Subramaniam and his team took advantage of cryo-EM, which can produce molecular images with high resolution and distinguish multiple states of a molecule. “This allows us to obtain snapshots of the complex in action and really explore molecular mechanisms,” Subramaniam explains.

The team generated images that show how the CRISPR surveillance complex used by the common bacterium Pseudomonas aeruginosa undergoes a dramatic shape change when it binds to DNA, unwinding its twisted form. The shift probably helps trigger destruction of the bound DNA, the researchers say. They also produced images that show different ways viral proteins can block the interaction of the surveillance complex with DNA, thereby helping an invader elude detection.

The findings give insight into the molecular mechanisms that bacteria use to protect themselves against invaders as well as defenses viruses have evolved in response. There are likely hundreds of different surveillance complexes at work throughout the bacterial and animal kingdoms, Subramaniam says, and his team plans to continue exploring their mechanisms. A more comprehensive view of surveillance complex tactics might suggest ways for researchers to refine CRISPR-based genome editing tools, making them even more powerful and precise.