Not all Tumor Cells are Created Equal

Loss of a genome-organization factor gives a subset of cancer cells the ability to self-renew. 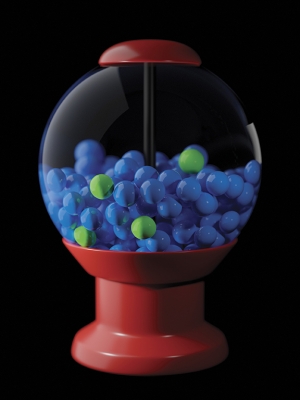 Like the contents of this gumball machine, tumors are highly heterogeneous and a few specialized cells (green) drive the growth of the entire tumor. Ongoing studies seek to understand the molecular differences between the various types of cells in a tumor. Credit: Joe Meyer, Scientific Publications, Graphics and Media, Frederick National Laboratory, NCI, NIH

The molecular makeup and biological properties of cancer cells can vary significantly, even within the same tumor. This heterogeneity agrees with the recent realization that usually only a small subset of the cells in a tumor have the capacity to sustain the tumor’s growth. Now, CCR scientists have uncovered a key determinant of these growth-sus­taining cells: loss of a DNA-packaging protein called linker histone H1.0.

The research was initiated when Paola Scaffidi, Ph.D., a former postdoctoral fellow in the laboratory of CCR Director Tom Misteli, Ph.D., and now a group leader at the Francis Crick Institute in London, sought an explanation for why some tumor cells can spur tumor growth and give rise to new tumors when they are transplanted into animals while other cells from the same tumor cannot.

Using sensitive single-cell analysis methods, including imaging, Scaffidi and her colleagues measured H1.0 in tumor samples from six different types of cancer. In every tumor, they found that levels of the histone varied signifi­cantly among cells. What’s more, glioblastoma and breast cancer samples that had the highest proportion of cells with low levels of H1.0 tended to be aggressive tumors. The team turned to The Cancer Genome Atlas, a resource collaboratively managed by NCI and the National Human Genome Research Institute, for additional genetic, molec­ular and clinical data and determined that low levels of H1.0 also correlated with poorer outcomes in patients with liver cancer, kidney cancer, melanoma and low-grade gliomas.

Histone H1.0 is one of the major proteins that organize DNA into the fibers of genetic material known as chromatin. By influencing how DNA is compacted into chromatin, histones help determine which of a cell’s genes are turned on and which are turned off. Histone H1.0 is usually most abundant in specialized cells with little ability to divide, where most growth-promoting genes are kept safely off. Various extracellular signals can influence how much H1.0 a cell produces, and the researchers speculated that interac­tions with the tumor microenvironment could cause some cancer cells to stop producing this critical protein.

How then does a chromatin protein affect the tumor poten­tial of individual cells? A hint comes from the finding that when tumor cells stop producing H1.0 histones, chromatin structure is altered and growth-promoting genes become reactivated. As a result, these cells regain the ability to self‐renew. Supporting this idea, Scaffidi and colleagues also noted that histone H1.0 is consistently low in cancer stem cells, which have an unlimited potential to divide.

Encouragingly, the effects of H1.0 loss appear to be revers­ible. The researchers found that they could drive tumor cells to differentiate and lose their proliferative poten­tial by restoring H1.0 production. The findings, reported in Science, suggest that it may be possible to stop tumor growth clinically with interventions that modify H1.0 levels or otherwise alter the chromatin landscape of tumor cells.