Studies of some of the body’s simplest chemical components suggest new strategies for empowering the immune system. 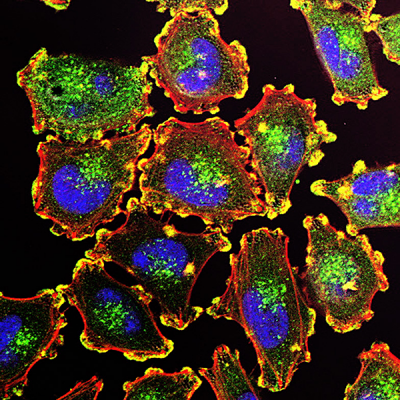 The immune system is continuously on the lookout for foreign objects. Most often these are viruses, bacteria or parasites, but the immune system also looks for tumors. For cancer to survive and spread, it must evade the body’s natural defenses.

Cancer cells find many ways to avoid being attacked by the immune system, but CCR investigators are learning enough about their tactics to begin to counter them. New research from Nicholas Restifo, M.D., a Senior Investigator in CCR’s Surgery Branch, has demonstrated how two elements that are common in the body, oxygen and potassium, suppress immune activity and create opportunities for tumors to grow. In animal studies, Restifo and his colleagues have shown that it is possible to engineer antitumor immune cells to be less sensitive to the effects of potassium or oxygen, which makes them more effective in places where cancer cells might otherwise grow unopposed.

Researchers have long known that many cancers spread to the lungs. Restifo and his colleagues were investigating the effects of oxygen on tumor immunity when they began to suspect that the abundant oxygen in the lungs might foster an environment where migrating cancer cells can settle and grow undisturbed. Indeed, they found that T cells, important components of the immune system’s anticancer defense, are less likely to trigger an attack when oxygen levels are high.

This restraint can prevent overactive immune responses to the dust, pollen and other particles that are commonly inhaled into the lungs, but when cancer cells infiltrate, sluggish T cells can be dangerous. Restifo and his colleagues reported these findings in Cell.

In a second study, published in Nature, Restifo’s team determined that potassium can also inhibit T cells’ ability to fight cancer. The body’s potassium is usually contained inside cells, but when tumor cells die, their contents leak into the space that surrounds them. In tumors with a lot of dead cells, or necrosis, extracellular potassium levels can rise sufficiently to impair T-cell responses.

Both findings hold promise for designing more effective cancer immunotherapies. Restifo’s team has already shown that introducing a potassium channel into T cells or disrupting the cells’ oxygen-sensing machinery enhances their function in mice. It may be possible to empower patients’ immune cells with the same modifications using drugs or genetic manipulation.

Restifo’s team plans to use their new knowledge to develop better treatments for patients with cancer. Their next step, he says, is to develop clinical trials based on the findings.