The identification of a cellular pathway involved in a rare premature aging syndrome suggests a strategy for treating the disorder and offers insight into the normal aging process. 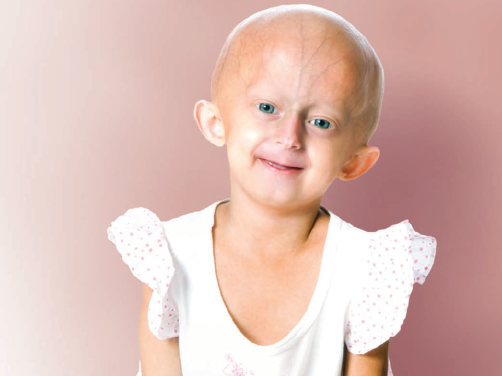 Aging is a major risk factor for most types of cancers. However, it remains unclear exactly how aging contributes to cancer development, especially because it is difficult to study the aging process in humans. To investigate the processes that drive human aging, Nard Kubben, a postdoctoral fellow in the laboratory of CCR Director Tom Misteli, Ph.D., has focused his attention on an exceedingly rare premature aging syndrome, the genetic disorder Hutchinson-Gilford Progeria Syndrome (HGPS).

HGPS causes many signs of premature aging, including stiff joints, hair loss and aged-looking skin, and patients usually die of heart attacks or stroke at a young age. Surprisingly, patients with HGPS seem to be protected from cancer, and Misteli’s lab and others are investigating why.

It has been known for more than a decade that HGPS is caused by a mutation in the gene for lamin A, a structural protein of the cell nucleus. The genetic mutation causes cells to produce a dysfunctional form of lamin A that scientists have named progerin. This protein disrupts a number of cellular features and compromises the integrity of the nucleus and the genetic material it contains, but researchers did not know how it caused such cellular havoc.

Kubben and Misteli used an imaging-based screening approach to identify genes whose inhibition restored normal function to the cells despite the presence of progerin. As they report in Cell, their experiments led them to a signaling pathway controlling the longevity-promoting factor NRF2, which normally defends cells against the damaging effects of free radicals. The researchers found evidence that progerin traps the NRF2 protein, preventing it from accessing and switching on the antioxidant genes needed for the cell’s free radical response. Consequently, free radicals persist and cause various forms of damage that underlie the defects seen in the cells of patients with HGPS.

Misteli’s team discovered that they could alleviate those problems by treating progerin-producing cells with chemical activators of NRF2, including the FDA-approved drug Oltipraz. Reactivating NRF2 reversed progerin-evoked defects in various cell types the scientists tested, including HGPS patient-derived stem cells in an animal model.

The finding suggests that restoring NRF2 function might prevent premature aging in children with HGPS and could revolutionize treatment of this rare disorder. Because small amounts of progerin are also produced in healthy individuals and the disruptive protein tends to accumulate as people get older, the discovery also brings researchers closer to understanding the normal aging process at a molecular level and developing therapeutic strategies to slow its effects. Notably, the research also points toward a connection between the antioxidant pathway and aging’s effects on tumor development, as changes in the NRF2 pathway have been implicated in several types of cancer.