Communities of microbes that make their homes in the diverse environments on human skin can persist for years. 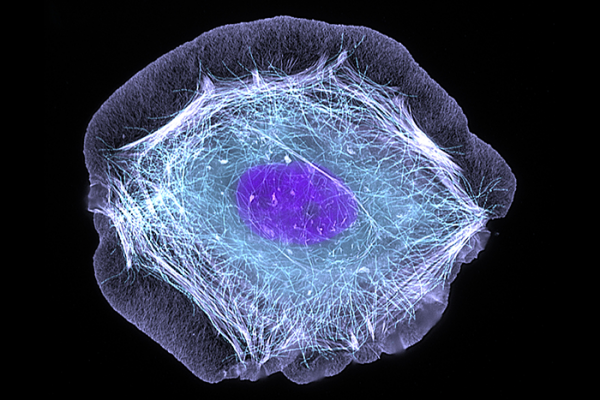 This normal human skin cell was treated with a growth factor that triggered the formation of specialized protein structures that enable the cell to move. We depend on cell movement for such basic functions as wound healing and launching an immune response. Credit: Torsten Wittmann, University of California, San Francisco

Human skin is a complex ecosystem in which trillions of bacteria, fungi and viruses mingle and interact with the cells of their host. Microbes blanket the palms, nestle between toes and huddle in crevices formed by hair follicles and sweat glands. According to new research, once they settle in, they tend to stay.

Microbes influence our metabolism, modulate our immune systems and likely impact human biology in ways we do not yet understand. Their presence may influence individuals’ susceptibility to cancer or their response to cancer treatments. Eventually, researchers hope to find ways to prevent or treat disease by manipulating the composition of the human microbiome, but first they need to understand the composition of these communities and evaluate their natural variability.

In 2014, CCR Investigator Heidi Kong, M.D., and her colleagues surveyed the bacteria, fungi and viruses present at different sites on the skin of healthy adult volunteers and found unique microbial communities wherever they looked. In addition to distinctions between different body sites, Kong and her colleagues found variations between individuals such that each person had a microbial “fingerprint” that was distinctly their own.

That study provided detailed information about a diverse array of microbial communities. Because skin is directly exposed to the outside world and comes into constant contact with soaps, sanitizers and other microbe-covered surfaces, however, it was unclear whether these communities remain constant or whether their members come and go.

In 2016, Kong and her colleagues extended their study and reevaluated the skin’s diverse microbial communities to investigate how they change over time. After inventorying the microbes present at multiple sites on the bodies of healthy adults, the team repeated the analysis for each individual two to three months later and again after one to two years. The team used sophisticated DNA-sequencing technology to examine the microbial DNA at each site and analyzed the genetic data to generate a profile of the community members. They reported their findings in the journal Cell.

The researchers found that, even after a year or two, most sites on the body hosted the same types of microbes that were present at the outset of the study. Some sites, like the feet, were more variable, and certain microbes were less likely to have stayed put than others. They also found that some study subjects tended to have more variable microbial communities than others. Overall, Kong and her colleagues found the skin microbiome to be remarkably stable.

Despite their apparent stability, illness and changes in immune function are known to disrupt microbiome communities. Antimicrobial treatments, changes in diet, probiotics and even relocation to a new living environment could cause an individual’s microbiome to shift. Kong’s work lays the foundation for future studies investigating the factors that perturb the skin microbiome and the health consequences of these changes, especially as they pertain to cancer.