A comprehensive molecular analysis of the second-most-common type of kidney cancer sets the stage for more precise diagnoses and more tailored treatments. 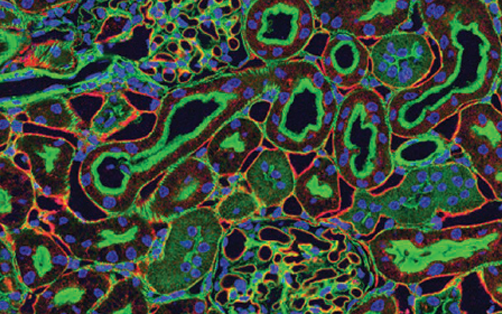 Stained kidney tissue. The kidney is an essential organ responsible for disposing wastes from the body and for maintaining healthy ion levels in the blood. It works like a purifier by pulling breakdown products of metabolism, such as urea and ammonium, from the blood stream for excretion in urine. Credit: Tom Deerinck and Mark Ellisman, National Center for Microscopy and Imaging Research

More than 60,000 people are diagnosed with kidney cancer in the United States every year. About 20 percent of these patients have papillary renal cell carcinoma, the second-most-common type of kidney cancer.  Currently, papillary renal cell carcinomas are classified into one of two subtypes based on their appearance under a microscope. Even within the same subtype, some of these cancers are much more aggressive than others, and clinicians need better tools for differentiating between these tumors and identifying the best treatments for individual patients.

The analysis, which compared the genetic sequences of tumors to those of healthy kidney tissue, analyzed patternsof gene activity and surveyed the proteins and RNA molecules present in tumor cells. It confirmed that the two clinical subtypes of papillary renal cell carcinoma are genetically distinct.

Type 1 tumors, the researchers found, may be characterized by disruptions to a signaling pathway involving the MET gene. Patients with these tumors might benefit from drugs that target this pathway. Changes to MET signaling are known to drive the growth and spread of cancer cells and spur the development of blood vessels that supply tumors with oxygen. Several inhibitors of the MET pathway are already being evaluated in clinical trials for the treatment of various cancers, including papillary renal cell carcinoma.

Among the Type 2 tumors, the researchers identified a subgroup characterized by high levels of DNA methylation, a chemical modification that dampens the activity of affected genes. Tumors in this subgroup were associated with the least-favorable clinical outcomes. Loss of the tumor suppressor gene CDKN2A, which affected about 25 percent of Type 2 tumors, was also associated with a poor prognosis.

These findings are the latest chapter of work completed by CCR scientists that have led to a more sophisticated system of classifying kidney cancers and allowed patients and their doctors to make more informed treatment decisions.