New insights into what fuels an aggressive form of kidney disease 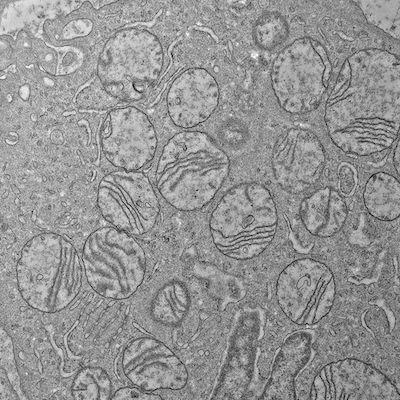 The ultrastructure of damaged mitochondria in a tumor from a patient with HLRCCC-associated kidney cancer.
Image credit: Crooks et al.

Upon analyzing tumor samples from patients, CCR researchers have uncovered an important mechanism that fuels an aggressive form of kidney disease. The results, published January 5, 2021 in Science Signaling, show how deficiency of an important enzyme severely impairs cells’ ability to repair and maintain healthy mitochondrial DNA. This causes mitochondrial DNA mutations which, in turn, results in the cells becoming more aggressive.

Hereditary Leiomyomatosis and Renal Cell Carcinoma (HLRCC) is considered one of the most aggressive forms of kidney cancer. A key characteristic of this cancer is the lack of an enzyme called fumarate hydratase (FH).

W. Marston Linehan, M.D., Chief of CCR’s Urologic Oncology Branch, has studied HLRCC in the past and found that a FH deficiency is associated with a shift in how HLRCC cells process energy. Whereas healthy cells typically use mitochondria to convert oxygen into energy, cancerous HLRCC cells tend to rely on a different mechanism for energy production that doesn’t require oxygen, called aerobic glycolysis. However, the mechanism by which FH deficiency causes cancer cells to shift to this alternative way of producing energy, which is associated with more aggressive cancer growth and spread, remains unknown.

Linehan and his colleagues, including Dan Crooks, Nunziata Maio, Jordan Meier, Mark Ball, Ramaprasad Srinivasan and Tracey Rouault, sought to better understand the mechanism behind this shift. They collected and analyzed 25 tumor samples from patients with HLRCC and found that, without sufficient FH, which catalyzes the hydration of fumarate to malate, a harmful amount of oncometabolite, fumarate, accumulates in the cells.

Genetic analysis revealed that this accumulation caused damage to important mitochondrially endoded genes, including POLG, that are responsible for replicating and maintaining healthy DNA. With this critical DNA repair mechanism impaired, the overall number of mitochondrial genes, including genes encoding the components of the electron transport chain, in the cells were greatly reduced and/or mutated; resulting in impairment of oxidative phosphorylation and a Warburg shift to aerobic glycolysis. The researchers attempted to reverse this phenomenon by adding more FH to the cells, but found that the damage was irreversible.

“These findings provide the foundation for the development of targeted therapies for patients with fumarate hydratase-deficient renal cancers characterized by a shift to aerobic glycolysis,” says Linehan. “We are currently working with Ram Srinivasan and others to develop therapies that target the pathways that are promoting the shift to aerobic glycolysis and disease progression in this prototypic model of glucose-dependent cancer.”