The discovery of a gene-activating enzyme’s role in reshaping DNA while it works suggests a new strategy for drug development. 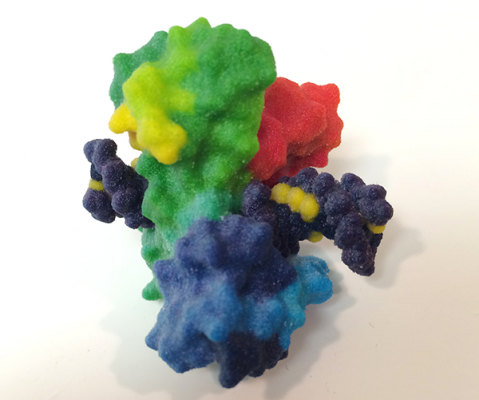 Topoisomerases create a break in over-twisted DNA, which frees it to swivel into a more relaxed state. Credit: NIH 3D Print Exchange

Inside cells, the graceful twist of DNA’s familiar double helix is frequently distorted. Its two strands must routinely be separated to make way for enzymes that copy the genetic code, forcing extra twists and kinks into nearby parts of the molecule. The resulting mechanical stress places strain on the genome that must be relieved.

That task is handled by enzymes called topoisomerases. Topoisomerases create a break in overtwisted DNA, which frees it to swivel into a more relaxed state. Then they repair the cut to ensure that a cell’s DNA remains intact. Many cancer drugs interfere with the final step of this process and prevent topoisomerases from resealing the breaks they create. Unresolved breaks build up until cells are overwhelmed by the damage and die.

Preventing topoisomerases from mending their breaks kills cancer cells, but it also damages DNA in normal cells. A better understanding of how these enzymes work might enable researchers to design a new generation of topoisomerase inhibitors that kill cancer cells with fewer side effects. New research led by Laura Baranello, Ph.D., a senior research fellow, and David Levens, M.D., Ph.D., Senior Investigator in CCR’s Laboratory of Pathology, revealed a surprising aspect of topoisomerase function that could help with that goal.

The discovery, published in Cell, came from experiments in which Levens and his team investigated how topoisomerase 1 (Top1) relieves the stress introduced into DNA during the process of transcription when DNA’s twin strands are separated so a gene can be copied into RNA. This process, executed by an enzyme called RNA polymerase II, is the essential first step in producing the protein encoded by a gene.

The team mapped Top1’s activity throughout the genome and noticed that while the enzyme frequently binds to the regulatory regions near genes’ start sites, it does not seem to be active. Instead, it only cuts DNA inside genes. This prompted the researchers to investigate how the enzymes transitioned from their inactive state into a form in which they are able to snip and repair DNA whose shape has been distorted by transcription.

They found that the very enzyme responsible for creating overtwisted DNA, RNA polymerase II, also directs topoisomerase to relieve that stress. Their experiments indicated that the polymerase activates the topoisomerase once transcription is under way. By coordinating topoisomerase’s activity with its own, the polymerase can produce RNA copies of genes without being slowed by the shape changes it forces into the DNA.

Because cancer cells tend to transcribe more genes than normal cells, they are likely to depend heavily on Top1 to rid their DNA of kinks and buckles introduced by RNA polymerase II. Levens and his colleagues think their discovery will lead to the development of drugs that disrupt the two enzymes’ interactions. Such drugs might block the Top1 activity that is needed by cancer cells without creating DNA damage. The hope is that this approach, based on a deep understanding of how topoisomerases work, will lead to drugs with less toxicity than the topoisomerase inhibitors currently used to treat cancer.