A FOX with No Footprints? 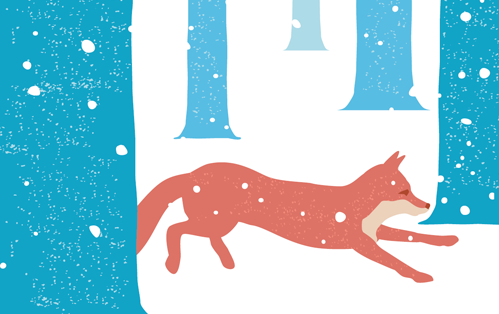 Hager et al. determined the FoxA1 factor leaves no detectable footprints at its binding sites throughout the genome, suggesting a more dynamic interaction with its environment. Credit: iStock

Hormones and hormone receptors are critically important for normal development, but they are also involved in cancer. The female hormone estrogen plays a particularly important role in many breast cancers. Once activated by the hormone, estrogen receptors on tumor cells bind to sites throughout the genome and switch on target genes, many of which promote cell growth. Understanding the role of estrogen signaling in breast cancer has helped scientists devise treatments that inhibit the growth of hormone-dependent cancers by blocking the activity of the receptor or the production of estrogen.

Although the estrogen receptor plays a key role in the growth and progression of many breast cancers, it does not act alone. Other proteins influence the receptor’s ability to find and activate its target genes. New research from CCR scientists shows how these molecules shape one another’s interactions with a cell’s DNA. The findings, from a team of scientists led by Gordon Hager, Ph.D., Chief of CCR’s Laboratory of Receptor Biology and Gene Expression, indicate that the cellular systems for regulating hormone-responsive genes are more complex and dynamic than previously recognized, suggesting new opportunities for therapeutic intervention.

In their study, reported in the journal Cell, Hager and his colleagues investigated interactions between the estrogen receptor, another hormone receptor called the glucocorticoid receptor and a protein called FoxA1, which have all been implicated in breast cancer.

FoxA1 binds directly to specific sites along DNA, including many of the sites to which the estrogen receptor binds. Because FoxA1 is thought to promote local changes in DNA packing that must occur before a gene can be activated, it has been considered a “pioneer factor.”

Many studies have suggested that the estrogen receptor cannot bind to the regulatory elements of certain genes until FoxA1 arrives on the scene. However, Hager and his colleagues determined that although FoxA1 can act as a pioneer factor for estrogen and glucocorticoid receptors, these roles can also be reversed. To determine how these factors work together to influence the behavior of breast cancer cells, the researchers mapped footprints left on the DNA where FoxA1 and the receptors bind and determined how the binding patterns changed in the presence of other regulators. They found that FoxA1, the estrogen receptor and the glucocorticoid receptor can all change the binding capabilities of the others. Further analysis suggested that, in some locations in the genome, estrogen or glucocorticoid receptors can bind first and ready DNA for the arrival of FoxA1. Using single-molecule tracking, they also found that FoxA1 and the receptors have very brief residence times on the DNA, a finding consistent with the lack of footprints.

The results suggest a new level of complexity in how these factors influence one another and interact with regulatory sites of the genome in breast cancer cells. The hope is that understanding this interplay will help researchers develop better ways to rein in growth-promoting genes not only in breast cancer cells but in all types of cancer cells.