A newly revealed target for a protein that drives cancer growth may lead to better treatment options. 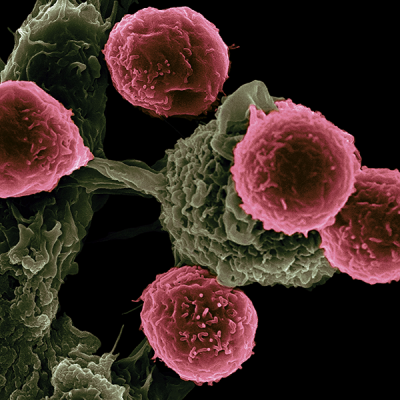 After promising results in laboratory experiments, an experimental class of anticancer drugs known as BET inhibitors is now being evaluated in early clinical trials. The drugs target a group of gene-regulating proteins called BETs, which boost gene activity according to chemical marks that they read on the DNA-protein complex known as chromatin. The inhibitors affect the binding of BET proteins to genes that control the growth of cancer cells, and there is hope that BET inhibitors will be effective treatments for a wide range of cancers.

The best-studied BET protein is BRD4, whose activities appear to help drive the growth of many types of cancer cells. This year, research in the laboratory of Dinah Singer, Ph.D., Senior Investigator in CCR’s Experimental Immunology Branch, revealed a new way in which BRD4 regulates gene activity. The discovery suggests a path for designing therapies that modulate gene activity more precisely than the BET inhibitors currently in development.

Like other BET proteins, BRD4 recognizes chemical marks on histone proteins, the major protein component of chromatin. Specifically, BRD4 recognizes and responds to acetylation, which is associated with increased gene activity. BRD4 mediates this boost in activity in two ways. Once it has latched onto chromatin near the start of a gene, it attracts other factors that interact with the DNA to turn the gene on. Secondly, it stimulates the activity of the RNA polymerase, the cellular machinery that reads the gene.

Singer and her team found that BRD4 not only reads patterns of histone acetylation along the DNA, but it also modifies chromatin by attaching more acetyl groups of its own. The researchers found that placing an acetyl group on a specific histone site weakens the chromatin fiber and leads to the eviction of histones, unpacking the DNA and making genes in the area more likely to be read. BRD4 adds acetyl groups to sites throughout the genome. Several growth-promoting genes, including the oncogenes Myc and Fos, are among those whose activity is enhanced.

This discovery, reported in Nature Structural & Molecular Biology, should enable researchers to develop better BET inhibitors. Based on these findings, it may become possible to specifically target BRD4’s enzymatic activities while sparing its other functions and leaving other members of the BET family fully functional, Singer explains. Drugs that work in this way might effectively treat cancers with fewer side effects than treatments that inhibit BET proteins more broadly.