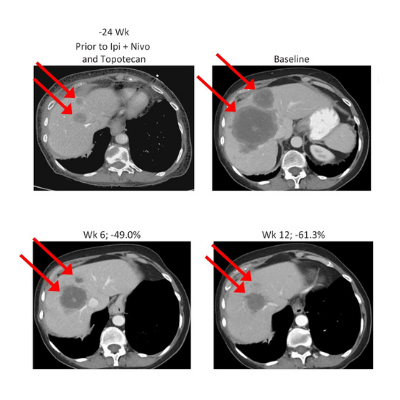 In a clinical study, CCR researchers found that targeting cancer’s ability to repair its DNA using a combination of berzosertib and topotecan induced tumor regressions in patients with chemotherapy-resistant small cell lung cancer (SCLC). The findings were reported April 12, 2021, in Cancer Cell.

Current treatment options for patients with small cell neuroendocrine cancers, including SCLC, are limited. Approximately two out of three patients respond well to initial therapy – a combination of platinum-based chemotherapy and immune checkpoint blockade – but nearly all patients succumb to chemotherapy-resistant disease.

Anish Thomas, M.B.B.S., M.D., Lasker Clinical Research Scholar in CCR’s Developmental Therapeutics Branch, led the effort to find a better treatment for these aggressive cancers. In collaboration with National Center for Advancing Translational Sciences investigators, led by Craig Thomas, Ph.D., he and his colleagues screened thousands of drugs for their ability to kill SCLC cells in the lab, then conducted a second screen to determine which acted synergistically with topotecan, a Food and Drug Administration-approved chemotherapy for SCLC that has recurred after initial therapy. They identified striking synergy involving drugs that block a key DNA repair protein called ATR, including berzosertib, a first-in-class ATR inhibitor.

In a 2018 study, they had identified a safe dose of a combination of berzosertib and topotecan. Now, they tested the drug combination in a single-arm clinical trial at the NIH Clinical Center, which initially enrolled 25 patients with SCLC. Nine patients experienced considerable tumor regressions, including six whose cancers were resistant to platinum-based chemotherapy. Responses to the treatment lasted, on average, for more than six months. Typically, only about five percent of patients with platinum-resistant SCLC respond to topotecan alone.

Encouraged by these results, the investigators expanded the trial to study patients whose small cell neuroendocrine cancers originated outside the lungs. Three out of 10 of the patients’ tumors shrank in response to the experimental treatment, including several patients whose cancer had previously progressed on topotecan alone.

“This was remarkable,” Thomas says. “We were seeing that this combination is effective not only for small cell lung but also for these other fatal, orphan cancers with shared biological features.”

To better understand why some patients respond and others don’t, they analyzed tumor biopsies of patients obtained before they started the clinical trial. Responding tumors showed high expression of genes driving extremely rapid cell growth and DNA damage repair, which Thomas says might have made the cancer cells particularly vulnerable to the berzosertib and topotecan combination. He says these findings could pave the way for more personalized treatment for SCLC, which is currently treated as a single disease with the same therapies used for all patients.

An NCI-sponsored randomized trial comparing the effects of berzosertib and topotecan combination therapy to topotecan alone in patients with small cell cancers is now underway. Results are expected in 2023. A separate clinical trial sponsored by the EMD Serono Research & Development Institute will evaluate the combination therapy’s effects, specifically in patients whose SCLCs are resistant to platinum-based chemotherapy. Read more about this study in the NCI Cancer Currents blog.