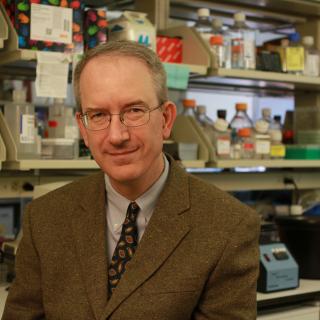 The Staudt laboratory uses genomic approaches to establish a molecular diagnosis of lymphoid malignancies and to discover new targets for therapy in these diseases (1). A mainstay of the laboratory is gene expression profiling, which provides a foundation to understand the molecular pathogenesis of these cancers and their response to therapy. New molecular subtypes of lymphoma defined by gene expression profiling emerge as distinct disease entities that differ in oncogenic mechanisms, as defined by other genomic technologies such as array-based comparative genomic hybridization and cancer gene resequencing. An ongoing interest is in RNA interference (RNAi)-based genetic screens for new therapeutic targets in lymphoma and multiple myeloma. A recurrent theme that emerges from these unbiased genetic approaches is that the lymphoid malignancies co-opt signaling proteins and transcription factors that are used in normal B cell differentiation and activation. These lymphoid-restricted pathways provide opportunities for the development of targeted therapies for the lymphoid cancers.

Genetic screens for new molecular targets. We previously developed loss-of-function genetic screens for new molecular targets in cancer using libraries of small hairpin RNAs (shRNAs) that mediate RNA interference (RNAi) (2). This approach provides an unbiased screen for genes that regulate the proliferation and survival of cancer cells, pointing to new directions for therapeutic attack. One recent success was the identification of the transcription factor IRF4 as a central regulatory hub in ABC DLBCL (3). The shRNA screens demonstrated that all ABC DLBCL lines depend upon IRF4 for survival. Further investigation revealed that IRF4 promotes constitutive NF-kB signaling in ABC DLBCL by transactivating CARD11, encoding a signaling adapter upstream of IkB kinase. At the same time, IRF4 blocks a type I interferon response by directly repressing IRF7, encoding a key regulator of interferon beta transcription. Other efforts in the laboratory revealed that the drug lenalidomide kills ABC DLBCL cells by interfering with IRF4 expression. This work provides mechanistic understanding of recent reports from early phase clinical trials showing that lenalidomide has preferential activity against ABC DLBCL.

In PMBL, the laboratory used RNAi screening to identify essential genes within a region of chromosome band 9p21 that is recurrently amplified in both PMBL and the related malignancy, Hodgkin lymphoma (HL) (4). A focused shRNA library targeting genes within this region identified 3 essential genes: JAK2, JMJD2C, and RANBP6. JAK2 Inhibitors killed cell line models of PMBL and HL and acted synergistically with shRNAs targeting JMJD2C. Since JMJD2C encodes a histone demethylase, the laboratory explored whether JAK2 might also act in the nucleus to modify chromatin. Indeed, both JAK2 and JMJD2C act together to block heterochromatin formation, thereby facilitating expression of many genes, including the oncogene MYC. This study demonstrates that cancer amplicons can harbor multiple cooperating oncogenes and argues for the clinical evaluation of JAK2 inhibitors in PMBL and HL.

Current efforts are aimed at whole genome screening for essential genes in a B cell and T cell lymphomas using both RNAi and CRISPR technologies.

Oncogenic mechanisms in lymphoid malignancies. Cancer gene resequencing is a useful adjunct to RNAi screening, often identifying recurrent somatic mutations that account for the addiction of cancer cells to particular regulatory pathways. The laboratory developed an analytic pipeline to discover mutations using high-throughput RNA resequencing (RNA-seq). One notable success was the discovery that ABC DLBCL lymphomas can depend on "chronic active" B cell receptor (BCR) signaling for survival (6). Knockdown of any BCR subunit or downstream kinases in this pathway proved lethal for ABC DLBCL cell lines because this pathway engages the anti-apoptotic NF-kB module. In over 20% of ABC DLBCL tumors, the CD79B or CD79A subunits of the BCR are somatically mutated so as to perturb their ITAM signaling motifs. These CD79B/A mutations promote BCR signaling by blocking negative feedback from the LYN tyrosine kinase and by increasing the expression of the BCR on the cell surface.

A parallel and cooperating oncogenic pathway in ABC DLBCL centers around MYD88, the key signaling adapter in the Toll receptor pathway. Somatic mutations in the MYD88 TIR domain occur in 39% of ABC DLBCL tumors, and are the most frequent oncogenic lesion yet described in this lymphoma (7). One amino acid substitution, L265P, is present in 29% of cases and creates an active MYD88 isoform that spontaneously coordinates a signaling complex involving the kinases IRAK1 and IRAK4, leading to constitutive NF-kB activation as well autocrine IL-6/IL-10 signaling through JAK1/STAT3. Genetically, the CD79B and MYD88 L265P mutations overlap more often than expected by chance, and accordingly, the BCR and MYD88 pathways cooperate to sustain ABC DLBCL survival. The laboratory is exploring small molecule inhibitors of IRAK4 kinase to exploit the MYD88 pathway therapeutically.

Most recently, we combined functional and structural genomics to identify the linear ubiquitin chain assembly complex (LUBAC) as a new therapeutic target in lymphoma (8). LUBAC consists of 3 subunits -- RNF31, RBCK1, and Sharpin -- and is responsible for head-tail joining of ubiquitin moieties in linear chains. We discovered rare germline-encoded single nucleotide variants in RNF31 that increase its association with RBCK1, thereby increasing LUBAC ubiquitin ligase activites. These mutations are present in less than 1% of the human population, but in roughly 8% of ABC DLBCL samples. Starting with this observation, we uncovered a required role for LUBAC in the constitutive NF-kB signaling in ABC DLBCL. We showed that LUBAC is an integral component of the CARD11 signaling complex, which uses LUBAC to attach linear ubiquitin chains to the IkB kinase gamma subunit, thereby stimulating its enzymatic activity. We designed peptide inhibitors of LUBAC that kill ABC DLBCL cells, providing a path towards developing therapeutic agents targeting LUBAC.

We conducted a large-scale analysis of recurrent somatic mutations in Burkitt lymphoma (BL) using RNA-seq that revealed new oncogenic mechanisms that coorperate with MYC translocations to generate this aggressive lymphoma (9). A regulatory module involving the transcription factor TCF3 (E2A) and its negative regulator ID3 was affected by mutations in ~70% of BL cases. These mutations were rare or absent in DLBCL and other lymphoma subtypes, indicating that this regulatory module is central BL pathogenesis. These mutations promote the action of TCF3, which is a master regulator of gene expression in BL. One action of TCF3 is to promote tonic BCR signaling in BL, which activates the pro-survival PI(3) kinase pathway. TCF3 augments BCR signaling by transactivating immunoglobulin genes, thereby increasing the BCR on the cell surface, and by repressing SHP-1, a key negative regulator of BCR signaling. Another TCF3 target is Cyclin D3, which promotes cell cycle progression in BL and is itself subject to oncogenic mutations in 38% of BL cases. These findings open up an array of therapeutic opportunities that might be exploited in settings in which high-dose chemotherapy is infeasible, as is the case with endemic BL in Africa.

Molecular diagnosis. Previous work in the laboratory established that diffuse large B cell lymphoma (DLBCL) can be subdivided by gene expression profiling into three molecularly distinct subtypes, termed activated B cell-like (ABC), germinal center B cell-like (GCB) and primary mediastinal large B cell lymphoma (PMBL). Moreover, these DLBCL subtypes can also be distinguished from two other aggressive lymphomas, Burkitt lymphoma and mantle cell lymphoma, using gene expression signatures. Working with academic and corporate partners, the laboratory is developing a gene expression-based diagnostic test to distinguish these aggressive lymphoma subtypes using formalin fixed and paraffin embedded (FFPE) biopsy samples, with the eventual goal of regulatory approval and clinical adoption of this test. Such a diagnostic test is needed urgently because the current therapies for these lymphoma subtypes differ and new therapeutic agents are being developed that target molecular pathways unique to each subtype. We have obtained outstanding discrimination between the ABC and GCB subtypes of DLBCL using the Nanostring platform to analyze FFPE biopsies (10).

Development of novel therapies for lymphoma based on molecular pathogenesis. The Staudt laboratory is working with Wyndham Wilson, Lymphoid Malignancies Branch colleague, to conduct clinical trials based on the insights into ABC DLBCL pathogenesis that have emerged from the Staudt laboratory. The kinase BTK is an essential component of the BCR signaling pathway that is required for downstream activation of NF-kB. Accordingly, knockdown of BTK kills ABC DLBCL cell lines with chronic active BCR signaling. Ibrutinib is a small molecule inhibitor of BTK kinase that the Staudt lab showed is a potent killer of ABC DLBCL cell lines. A phase 2 clinical trial was opened in the NIH Clinical Center examining ibrutinib in patients with relapsed/refractory ABC DLBCL, as determined by molecular profiling. Out of the first 10 patients, 2 achieved a complete remission and 1 had a partial remission. One patient has remained in complete remission for more than 3 years, taking ibrutinib orally each day with no discernable side effects. A multi-center, national phase 2 trial of ibrutinib in relapsed/refractory DLBCL has shown a high rate of response in ABC but not GCB DLBCL, as hypothesized. Importantly, complete and partial responses have been observed in patients with primary refractory disease that had never responded to conventional chemotherapy. Current efforts in the laboratory are aimed at identifying drug combinations that exhibit synergistic toxicity for lymphoma cells, and to understand the mechanistic basis for this synergy. The laboratory has teamed with the Chemistry Technology Group in the National Center for Advancing Translational Sciences (NCATS) to conduct high-throughput small molecule screens to identify synergistic drug combinations (11). This platform allows 10 serial dilutions of two drugs to be combined in a matrix format, allowing discovery of doses that reveal synergistic toxicity for tumor cells. Initial studies demonstrated that the toxicity of ibrutinib for ABC DLBCL cells is enhanced by concurrent treatment with inhibitors of the PI(3) kinase pathway, inhibitors of anti-apoptotic BCL2 family members, and various conventional chemotherapy agents. Future clinical trials supported by the Staudt laboratory aim to combine ibrutinib rationally with chemotherapy and other active agents, such as lenalidomide, based on molecular mechanisms of drug action that we have identified. 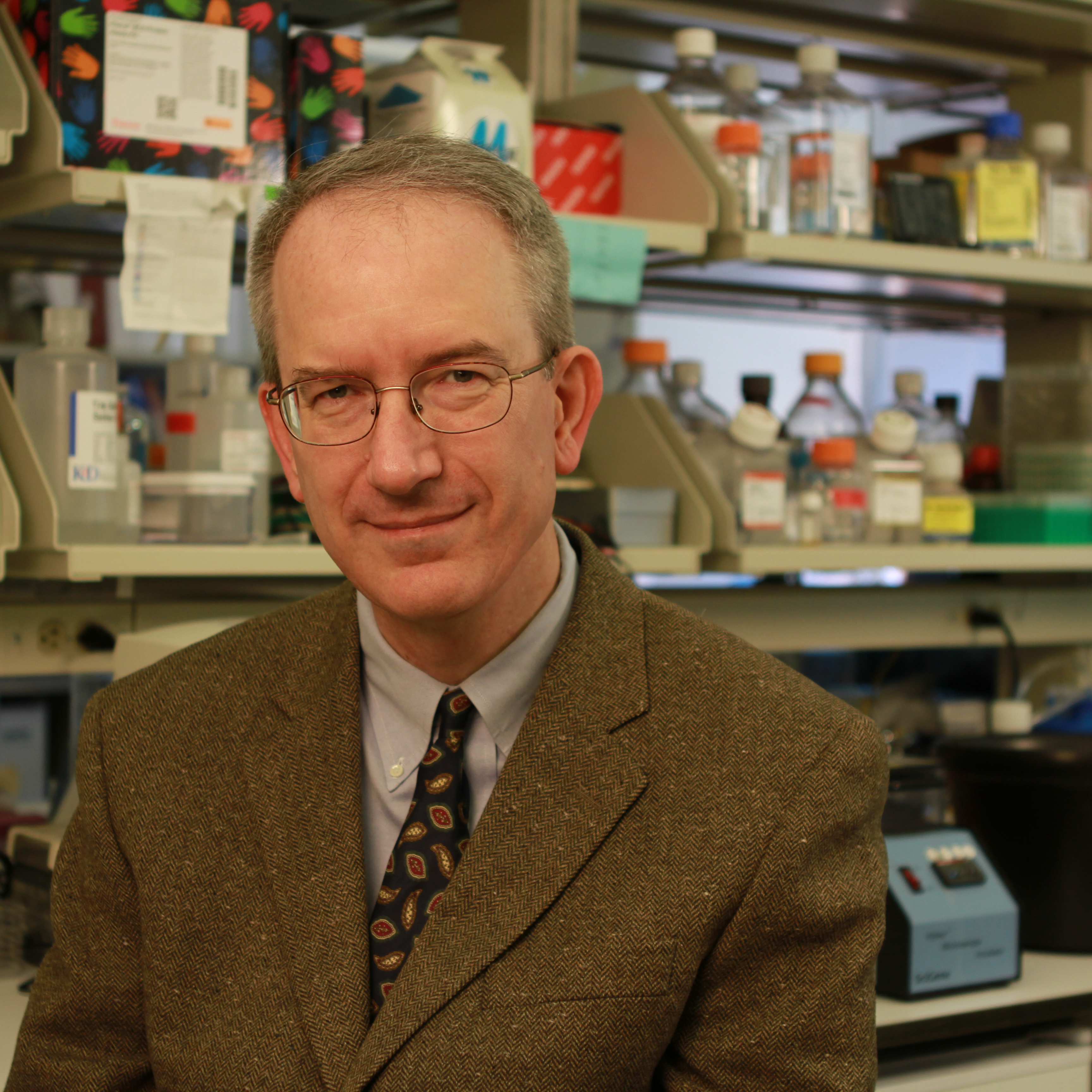 Dr. Staudt received his B.A. from Harvard College in 1976, graduating Cum Laude in Biochemistry. He received his M.D. and Ph.D. degrees in 1982 from the University of Pennsylvania. His Ph.D. thesis revealed somatic hypermutation as a mechanism of rapid antibody diversification during normal immune responses. Following Internal Medicine training, he joined David Baltimore's laboratory at the Whitehead Institute where he cloned and characterized the first tissue specific transcription factor, Oct-2. In 1988, he established his laboratory at the National Cancer Institute (NCI), which now focuses on the molecular basis for human lymphoid malignancies and the development of targeted therapies for these cancers. Dr. Staudt is currently Chief of the Lymphoid Malignancies Branch in the NCI. In addition, he serves as Director of the NCI Center for Cancer Genomics, which oversees several large-scale managed programs studying the genomic aberrations in cancer. In 2011, Dr. Staudt was given the honorary title of NIH Distinguished Investigator. He has received numerous awards for his research, including the 2009 Dameshek Prize from the American Society of Hematology for outstanding contribution in hematology, election to the National Academy of Sciences in 2013, and election to the AACR Academy in 2019. 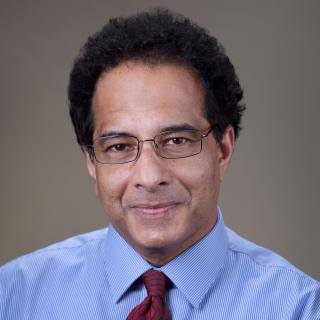