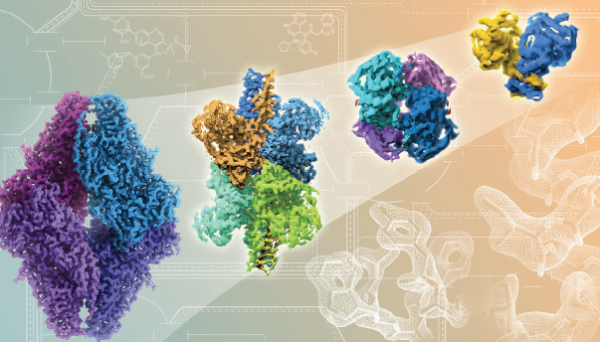 Subramaniam has refined a technique called cryo-electron microscopy (cryo-EM), which produces images detailed enough to reveal individual atoms throughout key regions of a molecule. Although cryo-EM has long been used as a research tool, the increased power of the technique means it now stands to accelerate drug development.

Visualizing precise three-dimensional structures helps researchers understand how biological molecules work. For decades, the favored method for determining the structures of proteins and other molecules has been a technique called X-ray crystallography. This method offers very high resolution, but it is not suitable for studying all types of molecules because it requires the formation of small crystals of the molecule of interest, which can be difficult to produce. Cryo-EM excels at revealing the structure of molecules that are not compatible with X-ray crystallography either because they adopt more than one shape or because they cannot be coaxed into a crystalline form.

To perform cryo-EM, molecules are flash frozen in liquid nitrogen, put on a flat surface and then, inside the microscope, bombarded with electrons to capture their image. The trick to obtaining three-dimensional information is to take thousands of two-dimensional images from various angles then average them together to generate a final three-dimensional structure. This is similar to looking at a sculpture from different sides to capture all aspects of it.

In the last few years, Subramaniam and his laboratory have pushed the boundaries of what can be done with cryo-EM. In a groundbreaking 2015 study, Subramaniam’s team overcame several major technical challenges to generate the highest-resolution image ever produced with cryo-EM—the structure of a bacterial enzyme called beta-galactosidase with near-atomic resolution. The structure offered details comparable to what, until then, could only be obtained with X-ray crystallography. In large part due to this study, the journal Nature Methods named cryo-EM its 2015 “Method of the Year” in recognition of the technique’s potential impact on medicine and biology.

The images Subramaniam’s team produced in 2016 are even better. The team reported in Science that they had used cryo-EM to produce a series of high-resolution structures of p97, an enzyme that influences protein levels inside cells. Interfering with p97’s activity is considered a potential strategy for slowing the growth of cancer cells. The images show how p97 twists and shifts as it prepares to perform its work and how binding of an inhibitor prevents these essential shape changes.

Later the team reported in Cell that they had used cryo-EM to determine the structures of several small metabolic enzymes, both alone and interacting with their small-molecule inhibitors, at near-atomic resolution. The genes for two of those enzymes, isocitrate dehydrogenase and lactate dehydrogenase, are commonly mutated in human tumors, and the proteins are considered targets for potential cancer therapies. Enzymes like these were previously considered too small to be imaged with cryo-EM.