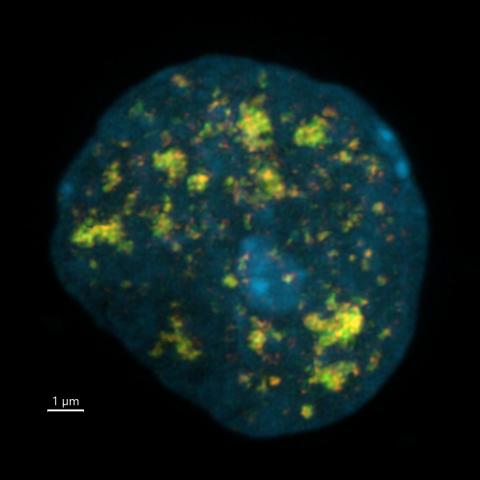 CCR scientists have discovered that in order for developing brain cells to become neurons, they must damage certain spots in their own DNA. That damage is usually swiftly repaired, but certain chemotherapy drugs can interrupt the process. When broken strands of DNA are left behind, cells respond to the lingering damage by triggering their own death. This may be one reason chemotherapy can sometimes cause cloudy thinking, a side effect often referred to as “chemo brain.” The research, led by Andre Nussenzweig, Ph.D., Chief of the Laboratory of Genome Integrity, was reported December 2, 2022, in Science.

When Nussenzweig and his colleagues started the study, they knew that long-lived neurons continually repair their DNA to keep their genomes intact, particularly within stretches of regulatory DNA called enhancers. Those enhancers, which have been found to accumulate mutations that may contribute to neurodegeneration and aging, are responsible for controlling neurons’ identities. In most cells, they are closed, keeping neuronal genes off. To become neurons, cells must open up these sections. That requires a process called DNA demethylation, which removes a chemical tag from the DNA.

Dongpeng Wang, Ph.D., the first author on the publication, together with Wei Wu and Elsa Callen, postdoctoral researchers in Nussenzweig’s lab, discovered that developing neurons replace a tagged letter (a methylated cytosine) of the DNA code with an untagged one (unmethylated cytosine) within an enhancer using a procedure that temporarily nicks the DNA. Cells are efficient at repairing this type of DNA damage, and once they do, their neuronal genes are ready for use.

Once the researchers understood how developing neurons go about demethylating their enhancer DNA, they recognized that Ara-C, a type of chemotherapy known to cause cognitive side effects for many patients, would interfere with that process. Ara-C is a cytosine base analog that is incorporated into newly manufactured DNA in actively dividing cancer cells, where it obstructs DNA synthesis and stops cell growth. It is an effective way of eliminating cancer cells — but in the brain, the researchers realized, the drug would also be added to neuronal enhancers during demethylation, preventing this process from completing.

When they exposed neurons growing in the lab to the drug, broken DNA strands were left unrepaired, and the cells reacted quickly. “The cell detects that this reaction is not fully complete and it triggers a massive DNA damage response that causes cell death,” Nussenzweig says.

Nussenzweig and his colleagues suspect this is what happens when Ara-C reaches the brain during cancer treatment: neurons that are actively demethylating their DNA can’t complete the process, leaving behind toxic levels of DNA damage. He notes that cognitive difficulties are a side effect of many kinds of chemotherapy, and the specific cause for these side effects probably varies across different drugs. But for drugs that work like Ara-C, their findings hint at a strategy for alleviating such problems.

When the researchers blocked demethylation at an earlier step by inhibiting an enzyme called TDG, neurons survived treatment with Ara-C. “If you degrade or you inactivate TDG, they don't die,” Nussenzweig says. “So we propose that if there were a way to inactivate TDG or other enzymes in the same pathway in the brain, you could prevent the neurotoxicity. This approach might be a way to reduce or prevent cognitive side effects for patients.”