Hotspots for DNA damage and repair in neurons identified 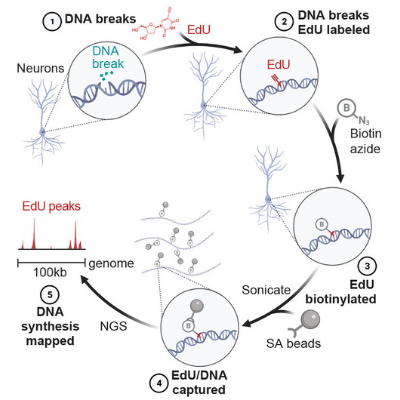 Schematic of SAR-seq (DNA synthesis associated with repair sequencing) methodology. Neurons grown in culture (1) are incubated with EdU to label sites of DNA repair synthesis (2). The incorporated genomic EdU is then conjugated to biotin via click chemistry (3), sheared by sonication to fragments of 150-200 bp and captured with streptavidin beads (4). Enriched DNA sequences are then PCR-amplified and subjected to next-generation sequencing (5).
Image Credit: Michael Ward, NINDS

Researchers have identified hotspots, areas called enhancers, along the genome of neurons where endogenous DNA breaks and repair accumulate. If the breaks are not repaired rapidly, they can lead to neuron dysfunction, degeneration and death. This finding, published March 25, 2021, in Nature, has implications for understanding and treating conditions such as Alzheimer’s disease and autism as well as certain types of mutations that occur in cancer.

“We know that the brain consumes 20 percent of the body’s total oxygen, and when oxygen is converted to free radicals, DNA damage to the brain occurs. This damage is associated with aging and is a risk factor for neurological disease,” explains André Nussenzweig, Ph.D., Chief of the Laboratory of Genome Integrity. “What we didn’t know was what form of damage actually accumulates in the neuronal genome and where it is localized. Our plan was to actually catch the repair process in action to better understand how it works.”

To accomplish this goal, Nussenzweig and colleagues added a thymidine analog, called EdU, to non-dividing neurons to track DNA synthesis during DNA repair – a new technique developed for this study. Since different types of lesions can be produced throughout the genome, the team hypothesized that EdU would be present globally.

Much to their surprise, however, they found that DNA repair occurred specifically at enhancers, short regions of DNA that can increase the likelihood of transcription, the process by which a gene’s DNA is copied into RNA. They then developed a new method to determine what type of damage was actually present at these sites. They found an abundance of DNA single-strand breaks. Interestingly, defective single-strand break repair is known to exclusively impact the nervous system. This work was done in collaboration with Michael Ward, M.D., Ph.D., National Institute of Neurological Disorders and Stroke, and Keith Caldecott, Ph.D., University of Sussex, England.

“Not only did we prove that repair was localized, but we also developed a hypothesis to explain why,” Nussenzweig says. “We think that DNA damage and repair is a programmed process designed to open up enhancers and facilitate transcription. Over the lifetime of an individual, neurons accumulate DNA damage, which can lead to mutations. Mutations at enhancers could disable transcription, which in turn could eventually lead to neurological dysfunction and disease.”

Nussenzweig believes that understanding the mechanisms behind DNA repair paves the way for many avenues of research. “With these two novel techniques we developed,” he says, “we can refine our knowledge of where damage occurs and how repair takes place – information that could be applicable to many disease states, including cancer.”