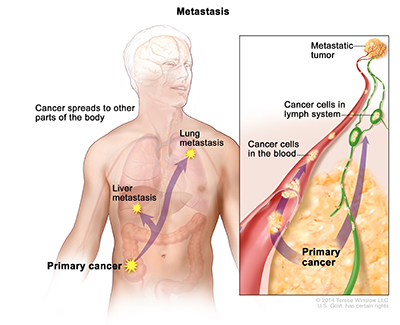 Scientists at the Center for Cancer Research are beginning a clinical trial to evaluate the safety and tolerability of metarrestin, a compound that laboratory studies suggest may stop the metastasis of many types of cancer. The first part of the phase I trial will evaluate the compound’s safety in up to 24 adults with solid tumors of any type that have progressed after chemotherapy. Subsequent stages of the trial are planned to assess metarrestin’s effects on tumors in patients with metastatic breast or pancreatic cancer as well as to evaluate the drug’s safety in pediatric cancer patients who are at least twelve years old.

Metarrestin was identified via a high-content drug screen and then further developed in a collaboration between CCR scientists and researchers at the NIH’s National Center for Advancing Translational Sciences (NCATS). As the first experimental cancer therapy that targets a marker of abnormal genome organization found only in cancer cells, it represents a potential new class of cancer therapy.

Researchers initially recognized metarrestin’s therapeutic potential because it effectively eliminates a structure from cancer cells called the perinucleolar compartment (PNC), which has been linked to metastasis. In subsequent testing, led by CCR Investigator Udo Rudloff, M.D., Ph.D. of the Pediatric Oncology Branch, it was found to suppress the growth of cancer metastasis and extend survival in animal models of pancreatic and other cancers.

“Any cell that wants to metastasize needs to have an intact perinucleolar compartment, a condensation of genomic DNA adjacent to but structurally distinct from the nucleolus,” Rudloff says. “This is a mechanism that is not only present in select indications like pancreatic cancer but would also be present across any type of cancer. So if metarrestin works in patients, it might really make a significant impact. If it proves effective, metarrestin might also be useful as a post-surgical therapy, to eliminate metastatic cells that can remain undetected after tumors have been excised and cause a patient’s cancer to return.”

Because animal studies have demonstrated that high doses of metarrestin can cause neurological side effects, Rudloff and colleagues have incorporated several safety mechanisms into the trial’s design to protect patients’ safety. Participants in the trial will be treated at NIH in Bethesda, Maryland, where they will be monitored for abnormal brain activity, memory loss and behavioral changes for up to five days following their treatment. Three patients will be treated at a time. Doses will slowly be escalated for subsequent treatment groups only if patients tolerate the drug and metarrestin’s concentration in the blood remains at acceptable levels.

Safety and tolerability results from the trial are expected in about one to two years. Once researchers have determined an appropriate dose of metarrestin for adult patients, the trial will evaluate metarrestin’s impact on disease in up to 32 adults with advanced breast or pancreatic cancers—two cancers for which new treatments are badly needed. In an abundance of caution, metarrestin’s safety and tolerability for pediatric patients will only be tested after a tolerable dose in adults is determined. Results from the complete phase I trial are expected in about four years.