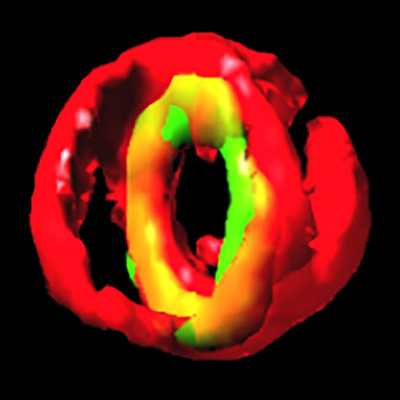 This reconstructed 3D fluorescence microscopy image shows a Staphylococcus aureus bacterial cell in the process of dividing in two. The cell membranes appear in red and GpsB, which has traveled to the middle of the cell, in green.

Researchers have found that a protein called GpsB travels to the middle of the bacterium Staphylococcus aureusand just before cell division, helps activate another protein, FtsZ, a core component of bacterial cell division machinery. S. aureus, commonly known as staph, is a prevalent source of hospital infections for cancer patients and others. These infections are becoming increasingly difficult to treat so this finding, reported October 2, 2018, in eLife, may have important ramifications in how these types of infections could be controlled.

Rod- and oval-shaped bacteria contain GpsB but do not need it to survive. In contrast, GpsB is “essential for life” in spherical S. aureus bacteria, says Kumaran S. Ramamurthi, Ph.D., Senior Investigator in the Laboratory of Molecular Biology. He and his team set out to determine what function GpsB carries out in S. aureusthat makes it so crucial for its survival.

They used a fluorescent label to track GpsB in S. aureus. The researchers observed that GpsB travels to the middle of the S. aureus bacterium as it is about to undergo cell division. In bacterial cell division, each cell splits down the middle, creating two identical copies of itself.

To further understand how GpsB interacts with FtsZ, the researchers fluorescently labeled FtsZ and observed what happened when they altered the amount of GpsB inS. aureus. S. aureus depleted of GpsB had less FtsZ mid-cell than normal S. aureusand eventually stopped dividing and died, suggesting that GpsB stabilizes FtsZ in the middle of the cell. This, in turn, increased the concentration of FtsZ mid-cell, which activates it, initiating cell division.

GpsB-overproducingS. aureussimilarly had less FtsZ mid-cell than normal S. aureus, but it kept growing until it finally burst. This suggests that excessive GpsB activates FtsZ prematurely, which prevents it from initiating cell division correctly; as a result, S. aureus continues to grow without dividing in two.

Overall, the findings suggest that in S. aureus, FtsZ recruits GpsB to the middle of the cell, and GpsB, in turn, stabilizes FtsZ and activates it to trigger cell division. In future research, Ramamurthi’s team hopes to explore the potential of GpsB as a therapeutic target for hospital-acquired S. aureus infections.

“The rise in antibiotic-resistant strains of S. aureushas necessitated this search for additional targets,” Ramamurthi says. That GpsB is required for the survival of S. aureus, but not other bacteria, makes it an ideal target for antibiotics, ensuring they attack only S. aureus and not potentially beneficial bacteria.