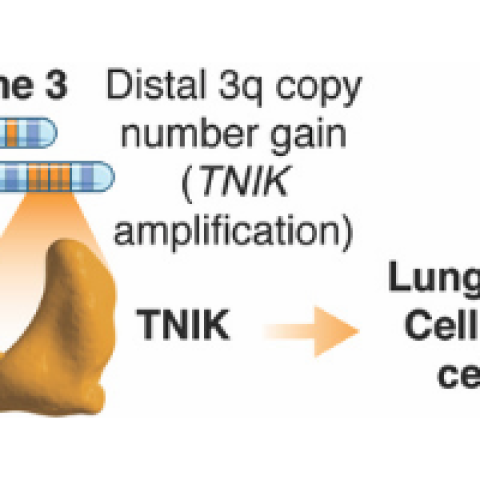 CCR researchers have identified the protein kinase TNIK as a therapeutic target for lung squamous cell carcinoma (LSCC), the second most common type of lung cancer. Using human lung cancer cells transplanted into mice (xenografts) the researchers found that the cancer cells responded to a pharmacological treatment that inhibited TNIK. Not only did TNIK inhibition lead to antitumor activity, it also resulted in cell death in the transplanted tumor cells. These findings, published in Cancer Discovery on January 25, 2021, point to the potential of using TNIK inhibitors to treat patients with LSCC.

John Brognard, Ph.D., Investigator in the Laboratory of Cell and Developmental Signaling (LCDS), and Pedro Torres-Ayuso, Ph.D., postdoctoral fellow in the LCDS, set out to determine how TNIK affects tumor growth in LSCC. “We knew that a chromosomal amplification (when more than two gene copies are present) was located on the long arm of chromosome number 3, also called 3q, which includes the TNIK gene, but we weren’t sure how frequently this would result in TNIK being amplified,” says Brognard. “The first step in our research was to answer that question.”

Encouraged by these findings, the team then sought to understand the mechanism through which TNIK amplification drives tumorigenesis. “We found that TNIK works with another protein, MERLIN, to keep lung squamous cancer cells viable,” says Torres-Ayuso. “In addition to targeting TNIK, we now know which pathway is involved.”

“This finding paves the way for further research,” Brognard said. “But the dosage needed for efficacy was too high for use in patients due to toxicity. Our next challenge is finding another agent that is effective at lower doses.” Torres-Ayuso concurred, adding that further understanding the role of MERLIN and TNIK in promoting tumor growth is also needed.

“We are excited about the possibilities of TNIK inhibitors as a first potential therapeutic target for LSCC,” concludes Torres-Ayuso.