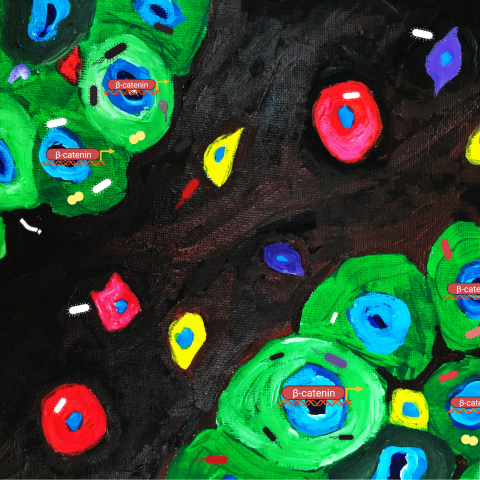 A new spatial analysis from Chen Zhao, M.D., and colleagues finds that the bacteria inside lung tumors concentrate in the cancer cells and are associated with activation of the beta-catenin signaling pathway. In this illustration, the lung tumors are depicted by the large green masses on the bottom right and top left; the bacteria and the associated beta-catenin signaling pathways are labeled by the red ovals.
Image credit: Chen Zhao, M.D.

Lung cancer cells harbor significantly more bacteria than other cell types found inside lung tumors, according to new research from CCR scientists. The research team, led by Chen Zhao, M.D., a Physician-Scientist Early Investigator in the Thoracic and GI Malignancies Branch (TGMB), also found that an important tumor-promoting signaling pathway is particularly active in tumor cells with high concentrations of bacteria. Zhao, his mentors Ronald Germain, M.D., Ph.D., National Institute of Allergy and Infectious Disease, and Arun Rajan, M.D., TGMB, along with Zhao’s collaborator Chengcheng Jin, Ph.D., at the University of Pennsylvania, reported their findings July 6, 2022, in the Journal for ImmunoTherapy of Cancer.

“Lung cancer is the leading cause of cancer-related deaths,” Zhao says. “If we can reduce the activity of tumor-promoting genes by reducing or manipulating bacteria, this may open the door to novel therapeutics.”

Zhao explains that the microbes within tumors are known to influence lung cancers’ progression and their response to therapy. But it has not been clear what the bacteria and other microbes are doing inside tumors, or even exactly where they are located. To find out, Zhao’s team turned to a new method called spatial transcriptomics, which allows researchers to analyze the RNA in individual cells while preserving those cells’ positions within a tissue.

Cancer Research Training Award fellow Abigail Wong-Rolle and other members of Zhao’s team used the technique to measure thousands of RNA molecules within tumor samples from 12 patients with lung cancer. Most of those molecules were indicators of the activity level of human genes, while others signaled the presence of bacteria or other microbes. Zhao’s team calls this approach to analyzing RNA from multiple species “spatial meta-transcriptomics.”

“Because we have this powerful tool, we can look at the bacteria and the tumor cells at the same time,” Zhao explains. The expectation, he says, was that bacteria would be most closely associated with the immune cells that had infiltrated tumors. But instead, the team found most bacteria localized with the cancer cells. They also discovered that tumor cells with high concentrations of bacteria had high activity within the tumor-promoting beta-catenin pathway. That suggests that the bacteria inside tumors may be helping drive tumor growth.

Zhao’s team has previously shown that antibiotic treatment to decrease bacteria in the lungs can reduce lung tumors in laboratory mice. While further research is needed to elucidate the relationship between human cancer cells and bacteria, Zhao says the new findings support the idea that reducing bacteria in the lungs might be beneficial for patients with lung cancer.