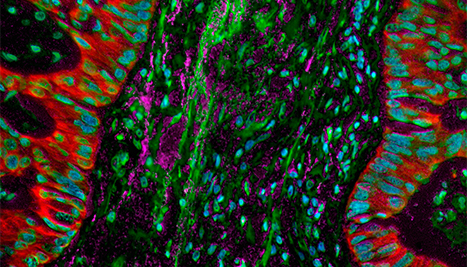 As shown here, lung cancer is associated with a vast stromal desmoplastic reaction (the "neighborhood") in which the connective tissue, associated with the tumor, thickens similarly to scars. Cancer is in red; cell nuclei in cyan; stroma/desmoplasia in green; and an active stroma-specific marker in purple.
Photo courtesy of NCI Visuals Online

The discovery of a higher mutation rate of two genes in tissue samples from African Americans with lung adenocarcinoma suggests that these patients may be particularly likely to benefit from drugs that target the PTPRT and JAK2 genes. The results were published December 16, 2019, in Nature Communications.

Bríd Ryan, Ph.D., M.P.H., Investigator in CCR’s Laboratory of Human Carcinogenesis, notes that large genomic projects such as The Cancer Genome Atlas (TCGA) have been very useful for accelerating discoveries in tumor biology and yielding new targeted therapies. “Yet most of this work has not had adequate representation of minority populations, including African Americans,” she says. “One of our main research goals is to fill this knowledge gap.”

Many of the people in this study were smokers, and indeed, the researchers found many of the same mutations that have previously been associated with smoking in lung cancer. However, they discovered that 30 percent of the lung tissue samples from African Americans with lung adenocarcinoma in this study had mutations in PTPRT or JAK2, whereas only 10 percent of samples from European Americans had mutations in either of these genes. The researchers analyzed two other genetic datasets, confirming their results.

Although no drugs targeting PTPRT currently exist, several that target JAK2 have been developed. Ryan and her team are now curious to explore whether these drugs, which were originally created to treat blood cancers, could be beneficial for lung cancer patients with JAK2 mutations. “We are excited to begin pre-clinical studies to assess whether tumor cells carrying mutations in JAK2 or PTPRT will be more responsive to drugs targeting these genes,” says Ryan. If so, the latest work by her team suggests that African Americans may be particularly likely to benefit from these targeted therapies.

Ryan says, “As of yet, we don’t know why these mutations occur at a higher frequency in African Americans with lung adenocarcinoma, but our continued studies to elucidate underlying mechanisms will hopefully help us translate these observations into targeted clinical interventions.”